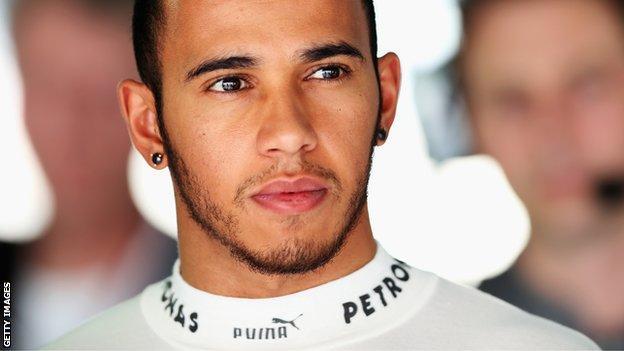 Lewis Hamilton says his Mercedes team are just about hanging on to Formula 1's front-runners but is hopeful they can compete soon.

I feel very fortunate to be where we are points-wise and finishing-wise but of course we need to keep pushing.

Mercedes have taken pole for the last two grands prix but are struggling with excessive rear tyre usage in races.

Hamilton said: "I feel like we're holding on by the skin of our teeth.

"The guys at the factory need to keep pushing because we're not that far off and if we can just make that next step we can close the gap with them."

Mercedes have made huge steps forward after ending last season struggling even to score points.

Hamilton was on pole and finished third in China earlier this month, while team-mate Nico Rosberg qualified fastest in Bahrain at the weekend, too.

But in the race on Sunday, Rosberg slipped back to finish ninth, having to make four pit stops for fresh tyres when most leading runners made only three.

Hamilton struggled in the early stages of the race after starting ninth because of a five-place grid penalty, but came alive in the second half of the race and finished fifth.

He is third in the championship after the first four races, 27 points behind leader Sebastian Vettel of Red Bull, who is 10 ahead of Lotus's Kimi Raikkonen.

Hamilton is three points ahead of Ferrari's Fernando Alonso, who won in China and would be second overall had it not been for team errors in both Malaysia and Bahrain.

Although the Mercedes is competitive in qualifying, Red Bull, Lotus and Ferrari are comfortably the fastest cars in the race, with Mercedes at the head of the next group which includes Force India and McLaren.

Hamilton said: "I'm very proud of what the team have done getting the car turned around to where we are already. I feel very fortunate to be where we are points-wise and finishing-wise but of course we need to keep pushing."

Mercedes have suffered problems with rear tyre usage since 2010 and Rosberg said the team were focusing on trying to solve them.

"The great thing is we have a great car," Rosberg said. "We just need to sort out these tyre issues, which is easier said than done.

"It is a massive mission and it is the same for everyone. Some people are doing a better job so we are pushing hard for that."

Team principal Ross Brawn added: "This is an issue we have to address and we will continue working on solutions to improve our performance in this area."