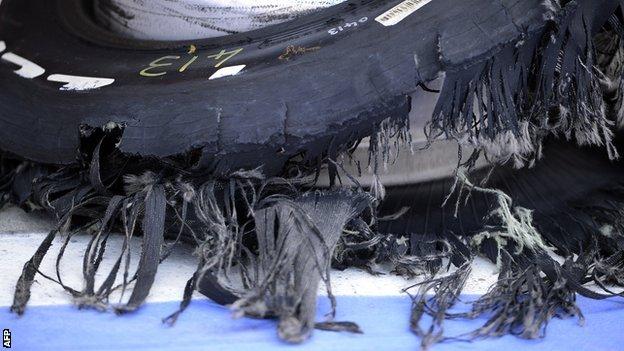 The sport of Formula 1 is facing a crisis following a series of dramatic tyre explosions during the British Grand Prix.

In total, six drivers suffered tyre failures during the race at Silverstone on Sunday, including Englishman Lewis Hamilton, who lost the lead and a probable victory as a result of the puncture on his Mercedes, and Ferrari's double world champion Fernando Alonso.

Tyres all exploded at high speed after suffering punctures. And, with the next race in Germany this coming weekend, it has raised a serious problem.

All the failures happened at more than 100mph - and some of them at nearly 200mph.

There were no injuries. But as BBC F1 co-commentator David Coulthard, a 13-time grand prix winner, has said in his BBC Sport column, tyre failures are known in motorsport as potential driver killers.

The failures themselves can cause a loss of control - Ferrari's Felipe Massa spun off the track as a result of his failure on Sunday - and the high-speed debris produced can cause injuries or worse.

Senior figures accept a solution is needed immediately, but it is not yet clear exactly how the problem will be solved in time for this weekend's race at the Nurburgring, where practice starts on Friday morning.

Why did it happen?

Formula 1's tyre supplier Pirelli and the sport's governing body the FIA have launched an investigation into what caused the high numbers of failures at Silverstone.

Initial suggestions are that the tyres have been cut by the edges of kerbs on the inside of corners, which racing drivers cut to make the fastest lap time.

"There are any number of issues which can prevent a Formula 1 car finishing a race - engine failures, gearbox failures, hydraulics, you name it. They are annoying and frustrating.

"But there are a few issues that are more serious that that. And tyre failures - like brakes failures - are right up there as being as bad as it can get.

"It is a really big worry and something urgently needs to be done about it.

"If I was still a driver, I would be very anxious about racing on those tyres again."

But Alonso pointed out that Silverstone has hosted grands prix for many years without such a problem so the problem cannot be confined to the circuit itself.

It is believed that the structure of the tyres themselves is at fault.

F1 tyres are enormously complex items, which have to withstand a variety of massive forces - F1 cars decelerate at forces of 6G and corner at up to 5G.

Small tweaks to the design can make huge differences to the way a car performs, and there are many different ways to approach the building of a tyre that define how the tread interacts with the track surface and how the tyre deforms under load.

In simple terms, a tyre is effectively made of rubber bonded to a 'carcass' - a hard material that creates the shape of the tyre. That carcass can be made of a variety of materials, most commonly steel or some kind of composite.

The current F1 tyres have a steel carcass. After a series of failures of a different kind at previous races this season, Pirelli has for several weeks wanted to change this to Kevlar but politics in what is a notoriously complex sport have prevented it from happening.

The obvious solution is to allow Pirelli to use tyres of a Kevlar construction - as it did last year, when these problems did not surface - and as a precaution to smooth off the sharper edges of the kerbs.

They cost about £1,300 a set (or £325 a tyre) but unlike a road-car tyre, which can last in the region of 20,000 miles, they are built for performance and - in the case of F1 - designed deliberately to wear out quickly to generate races with more pit stops, which are considered to be more exciting.

The longest a set of tyres has lasted this season is the 56 laps achieved by Scot Paul Di Resta's Force India in the Canadian Grand Prix, which is 151 miles.

More usually, teams will change them for a new set after 15-20 laps of a typically three-mile track.

How many types of F1 tyres are there?

Pirelli has four different types of tyre to use over the entire 19-race Formula 1 season.

At each race, the company supplies two types of tyre, both of which must be used by each driver at some point in the race.

The two types are called 'prime' and 'option', but each can be any one of the four different tyres - 'super-soft','soft','medium' and 'hard'.

As the names suggest, the tyres are graded in terms of durability, with the 'super-soft' the least durable and the 'hard' the most.

The choices of which tyres are used at each race are made on the basis of giving two that will have different kinds of performance but at the same time be suitable for the particular demands of each track.

The idea is to have a softer, grippier tyre that teams will use to set the fastest possible time in qualifying but which has a much shorter life than the more durable other tyre. The choices are made in an attempt to ensure diverging race strategies between the teams.

Deciding on which tyre to use

Each circuit has characteristics that will dictate the choice, including abrasiveness, corner types, general grip levels, usual ambient temperatures and so on.

So the Spanish Grand Prix, for example, is held on a track that has an abrasive surface and which contains a series of long, demanding medium and high-speed corners that put a lot of strain on the tyres. So Pirelli is taking the medium and hard tyre there.

Monaco, by contrast, lacks grip and generally has short, slow corners so demands on the tyre are low. Hence the use of the soft and super-soft.

Why only one tyre supplier?

Following Michelin's withdrawal in 2006, on the back of consecutive world championship victories with Fernando Alonso and Renault, F1 changed its sporting regulations to ensure there could only be one tyre supplier - Pirelli.

Part of the reason for this was said to be cost - the tyre war was expensive for teams because of the extensive testing the competition required.

But in these days of strictly limited testing there is no reason why a tyre war could not take place without teams trying out the tyres in between races. But F1's bosses prefer the control a single supplier gives them and the opportunity it provides to tailor the type of spectacle provided.

In the event of wet conditions, two tyres are available - the 'intermediate' for damp conditions; and the 'extreme wet' for heavy rain. In the event of these tyres being used, drivers are no longer required to use both types of dry tyre should the track dry out.

Pirelli has been asked by F1 bosses to provide tyres that ensure drivers have to make at least two pit stops in a race whenever possible.

The life of an F1 tyre is dictated by either wear - literally it running out of rubber - or thermal degradation, where the conditions make it overheat to the point that grip reduces so much that the tyre has to be changed. Usually, the timing of pit stops is dictated by one or the other.

There has been argument about whether the tyres are too fragile - in China, for example, drivers starting on the 'soft' tyre stopped to change them after just five or so laps.

Even so, F1 tyres are far tougher than those on road cars, which may be able to last for 20,000 miles or more, but would not stand a chance against the rigours of F1 racing.