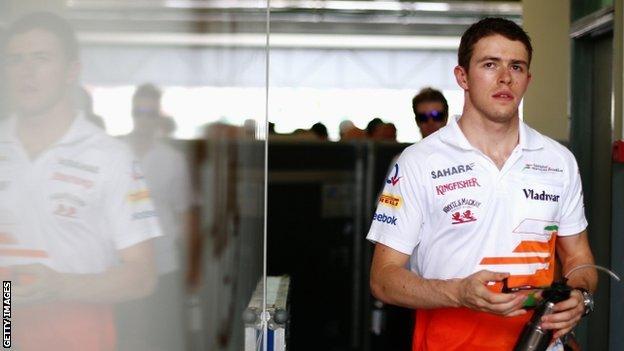 Paul di Resta can become a Formula 1 world champion given the right car, according to ex-F1 driver Allan McNish.

Scotland's Di Resta produced one of the best drives of his career to finish fourth in his Force India in Bahrain, just missing out on a maiden podium.

"Paul was driving like the old Jackie Stewart," said McNish. "It was the 'looking as if you're driving slow but actually driving very fast' approach.

"If someone puts him in the right car, he can fight for the world title."

Speaking to BBC Sport, McNish added: "That opportunity of getting in the right car, to be able to do it, is probably going to be the hard part to achieve.

"But it's performances like in Bahrain that will put his name in the frame for some of the seats that might be coming up at the end of the season."

Di Resta spent much of the Bahrain Grand Prix in the top three, even leading the race at one point. However, he was overtaken by the Lotus of Romain Grosjean, who was on fresher tyres, with five laps to go.

The Scot ended up two seconds adrift at the finish to end up fourth, equalling his previous best performance from Singapore last year.

He is now eighth in the drivers' standings with 20 points, ahead of the likes of Mercedes' Nico Rosberg and McLaren's Jenson Button, as well as being 14 clear of Force India team-mate Adrian Sutil.

Di Resta, who beat Sebastian Vettel to win the 2006 Formula 3 Euroseries, was widely tipped to sign for a big team at the end of last season, but a move failed to materialise.

Despite the knockback, the 27-year-old threw himself into a new gruelling training regime over the winter and is this season displaying a more relaxed and confident persona both on and off the track.

"I think he has developed and grown up," added McNish, who will be the BBC Radio 5 live analyst for the Spanish Grand Prix.

"He had a difficult winter because he had no team-mate and was the one the team looked to for the lead on development.

"He's still young and he's still got a lot of years ahead of him.

"That result in Bahrain will give him a lot of confidence and belief in what he can do inside the car. I would say a podium is on the cards at some point of the year. I don't think that's unrealistic."