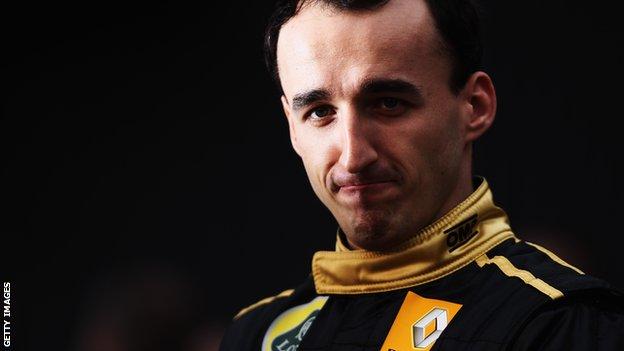 Mercedes say they will make a Formula 1 car available for Robert Kubica to try if he recovers sufficiently to be able to drive one.

The Pole, whose right arm was partially severed in a rally accident in 2011, has driven Mercedes' F1 simulator.

"If there's any chance of getting him back in a DTM touring car or F1 cockpit, we'd love to do it," said Wolff.

"Any team would love to have a Robert Kubica."

But Wolff, also the executive director of the Mercedes F1 team, emphasised that the former BMW and Renault driver was focusing mainly this year on his programme in the European Rally Championship.

"He is somebody I have known for 10 years but it's absolutely his call how he wants to help us and his main focus is rallying," said Wolff.

Kubica, 28, is competing in rallying this season as he continues his recovery from the injuries that forced him out of F1 ahead of the 2011 season.

The Pole, who was one of the most highly regarded stars in F1, is undergoing regular rehabilitation on his right arm, which still does not have full movement.

Kubica posted competitive lap times earlier this year in a Mercedes DTM (German touring car championship) car - during a test arranged by Wolff - and admitted at the weekend that he had been in the Mercedes F1 simulator.

BBC Sport understands the door is open for Kubica to continue to use the Mercedes simulator should he wish to do so.

Kubica has made no secret of the fact that he wants to return to F1 eventually, assuming he can recover sufficient movement in his right arm to allow him to operate an F1 car within the tight confines of its cockpit.

"There is no guarantee I will or will not come back to F1," he told Autosport magazine on last weekend's Rally Azores.

He added: "Unfortunately, my F1, not career, but my F1 story got interrupted, so I found rallying was my best option to slowly come back. For this year, it was what I was looking for."

Kubica's former team Lotus, which changed its name from Renault ahead of the 2012 season, have also made it clear they would welcome Kubica back.

And Ferrari have in the past made no secret of their admiration for his skills.

But the fact Kubica is now being given access to the Mercedes simulator - one of any F1 team's most closely guarded secrets - suggests they would be his number one option should he recover sufficiently to allow him to race in the sport again.