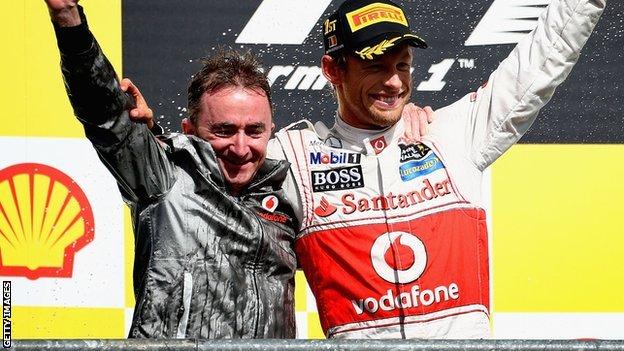 Mercedes have agreed with McLaren for Lowe to join on 3 June, in the role of executive director (technical).

It is part of a major restructuring at the team, which Britain's former world champion Lewis Hamilton drives for.

Lowe was originally recruited last winter with the intention of replacing Brawn, but Mercedes have since changed their plans.

McLaren announced in March that Lowe was being removed from his role as technical director because he was moving to another team, but said at the time he would see out his contract until the end of this year.

Lowe will now join next month after Mercedes reached a compromise deal with McLaren, who will next year use the German company's engines for the last time before switching to Honda.

Lowe is part of a succession plan for Brawn, who is 59 this year, but it remains unclear how long the man who masterminded all of Michael Schumacher's seven world titles, as well as Jenson Button's in 2009, will remain in his role.

In the meantime, Lowe, 51, will help the team manage the difficulties of designing a car to next year's new rules, which will introduce 1.6-litre turbo-charged V6 engines with extensive energy recovery in place of the current 2.4-litre naturally aspirated V8s.

Lowe, whose recruitment by Mercedes was exclusively revealed by BBC Sport in January, said in a statement: "I am excited to become part of a highly talented and capable technical organisation.

"The team has already produced probably the fastest car of the 2013 season while the technical challenges of the new regulations for 2014 will give us the opportunity to maximise the synergies available to a works manufacturer.

"That is a challenge I am relishing. I have worked closely with Mercedes-Benz for almost 20 years and deeply admire the company's phenomenal commitment to Formula 1. I look forward to much success together in the years ahead."

His role effectively oversees all of the team's technical operations, and Brawn said he was "delighted" Lowe was joining the team.

"He has an excellent record of success in the sport and would be an asset to any of our rivals in the pit lane," he said.

"It is no secret that every team is facing a significant balancing act between this year and next.

"But it is perhaps less obvious that we will also see major changes for the 2015 and 2016 seasons, as development progresses with the new generation of car design and power unit.

"To deliver in these circumstances, a successful team needs strength in depth. Paddy's arrival will further strengthen our organisation and puts us in a strong position for the future."