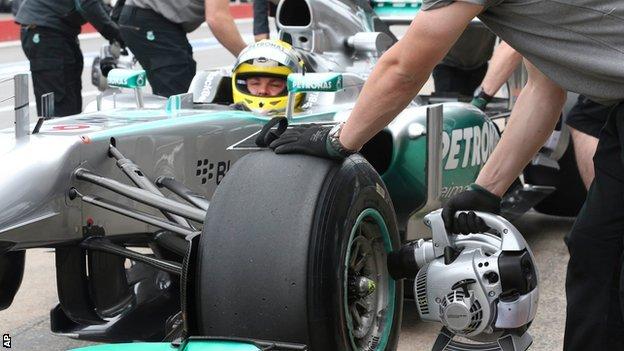 Mercedes have been banned from this year's young driver test and reprimanded for taking part in a controversial Pirelli tyre test.

Pirelli has also been reprimanded for its role in Lewis Hamilton's team running a 2013 car at the three-day test in Spain last month.

An FIA tribunal found the team breached F1's rules and an article covering bringing the sport into disrepute.

It took into account that the FIA had given "qualified approval" to the test.

In a statement Mercedes said it "acknowledges and accepts the decision of the FIA International Tribunal."

It added: "In the best interests of the sport, the team does not intend to avail itself of any right to appeal the decision.

"We now wish to bring this matter to a close and focus on the forthcoming British and German Grands Prix, both of which are important home races for the team."

The young driver test runs for three days at Silverstone from 17-19 July. Last year, Mercedes completed 1,354 kilometres in the rookie test. The Pirelli test, conducted with race drivers Hamilton and Nico Rosberg at the Circuit de Catalunya on 15-17 May, ran for 1,000km.

Costs of the investigation and international tribunal procedure have been shared equally between Mercedes, Pirelli and governing body the FIA.

The tribunal said that:

The tribunal found in mitigation that:

The tribunal said it was "unable to express any opinion" as to whether testing carried out by Ferrari with a two-year-old car in 2012 and 2013 was "properly authorised". But it said it was "equally unsatisfactory" that Whiting had given his consent to this even though the tribunal "had no evidence before it which indicates his opinion had in fact been wrong".

The decision to split the costs equally suggests the tribunal felt the FIA was not completely blameless in the episode.

The hearing on Thursday had established that Mercedes had asked permission for the test from the FIA, which had said it was theoretically possible as long as the other teams were given the same opportunity.

Neither Pirelli nor Mercedes informed the other teams of the test, apparently thinking that a previous general request to the teams asking for assistance in tyre testing was sufficient.

The test was conducted behind closed doors with Hamilton and Rosberg wearing black helmets rather than their normal colours.

Mercedes said at the hearing that they regretted the decision to change their helmets and apologised for it.

The test caused outrage among the other teams when they first heard about it at the Monaco Grand Prix. They insisted that running a current car was against the rules.

Red Bull and Ferrari lodged an official protest against Mercedes, starting the process that led to the tribunal.

Ferrari questioned the severity of the punishment issued.

"It is somewhat perplexing to say the least to see that the guilty party can get away virtually scot free for having derived 'an unfair sporting advantage'," the Italian team said in their Horse Whisperer column.

"The rules are very clear: you cannot test with a car from the current year."

Red Bull team principal Christian Horner said of the verdict: "We raised the protest as we wanted clarity on whether you are allowed to test in-season with a current car, as we believe this was a breach of the regulations.

"The penalty is not for us to decide. It was for the tribunal to decide and they have made their decision."