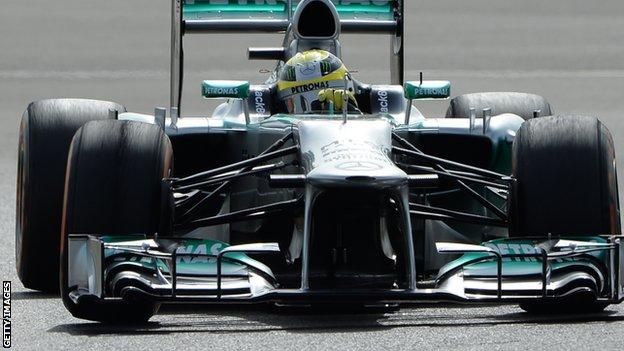 Rosberg, who has taken pole position in three of the last four races, was 0.146 seconds ahead of Hamilton.

Red Bull's Sebastian Vettel and Mark Webber were third and fourth but half a second behind the Mercedes.

Alonso did not improve on the faster 'medium' tyres on his qualifying simulation run at the end of the session, adding to the sense that Ferrari are struggling for pace this weekend.

The Spaniard, who is 36 points behind Vettel in the championship heading into the race, was 0.967secs behind Rosberg.

Hamilton set the fastest first sector split time of anyone, but ran wide at the Brooklands corner and had to abort that lap.

That meant his fastest lap time was set on his third lap on the medium tyres, when they are past their best, whereas Rosberg set his time on his first flying lap.

On the face of it, the two Mercedes drivers look set to stage a private battle for pole position when qualifying starts at 1300 BST, although both Vettel and Webber can be expected to be closer.

Mercedes' weakness this year has been race pace because of their car's high tyre degradation, but in second practice on Friday they appeared to be in better shape than normal.

However, Vettel appeared to be strongest of all and will remain favourite to win even if he cannot qualify on the front row.

The German and Alonso were among the drivers who had off-track moments at the exit of the challenging Becketts section, where strong winds were disrupting the aerodynamics of the cars.

The two title rivals merely had brief excursions into the run-off area as a result of losing front grip.

It was an eventful session for Perez, who also suffered a tyre failure at the exit of the high-speed Copse corner.

The Mexican's left rear tyre exploded leaving huge chunks of rubber on the track. The session was briefly stopped for the debris to be removed.

The turnout and support you get as a British driver is always a surprise. Even after all these years it's still a shock to the system seeing all those people standing out in whatever weather, holding flags for you. I never thought I would have so much support...

Pirelli has suffered a series of rear tyre failures this season and has for this race introduced what it believed was an improved bonding process to try to prevent the failures.

Pirelli later discovered that the tyre suffered a cut in the sidewall from an unidentified object.

McLaren managed to fix the car and get Perez out again before the end of the session, whereupon he had his spin at Copse and ended up only 18th fastest.

Team-mate Jenson Button was 12th as it appeared updates introduced by McLaren had not provided a significant step forward.