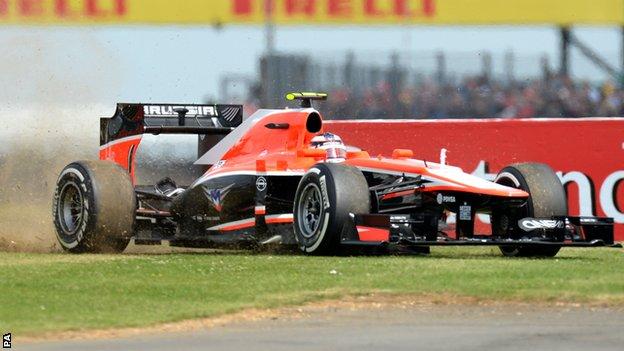 Qualifying wasn't great for me and, to be honest, I'm really disappointed.

I was really struggling with the balance of the car and couldn't get it set up as I wanted. We sorted a few of the issues out after free practice 3 to make the car feel more comfortable but everyone else made a step forward too.

I would have loved to have had a good qualifying because it's my home race but there's no point letting it get me down. The race pace is better so I just need to focus on the race now.

The fans were great again. I didn't have as much time to see them on Saturday as I did on Friday because it was drier and we had plenty of work to do following the wet session. But they've been brilliant all weekend. The place is packed and it makes such a difference to have their support.

It's a late start on race day, so I aim to get to the track for around 09:30 BST. I'll have my breakfast before I get to the paddock so once I arrive, I can head straight over to the garage and have a chat with the engineers.

We'll talk through the data that we gathered from Saturday and discuss strategy options for the race.

The drivers' parade follows, which is a great part of the weekend. All of the drivers stand on a trailer and are driven round the track. It's a good time to chat with the other drivers, because you don't get too much time to socialise during the race weekend as it's so busy.

But the best thing about the parade is that it gives us the opportunity to see all the fans and thank them for their support throughout the weekend. It's great to see so many union jacks and banners all around the track.

We then have about an hour before we have to get in the car and drive to the grid to start my pre-race preparations. That just gives me enough time to eat lunch - probably chicken or salmon with couscous again - and get changed into my race suit.

Thirty minutes before the start, I climb into the car and drive round to the grid to take up my starting grid slot. Once I'm out of the car I'll have one final chat with my engineers.

After a quick 'pit stop' to the toilet, I have to rush back to the grid, get my helmet and gloves on and climb into the cockpit ready for the race. I don't get nervous, it's more excitement. The lights go out and we're away.

I'm really looking forward to the race, even though qualifying wasn't so good, and our target has to be finishing ahead of both Caterhams. Of course we're chasing that first World Championship point, but at the moment we'll need luck on our side to get it.