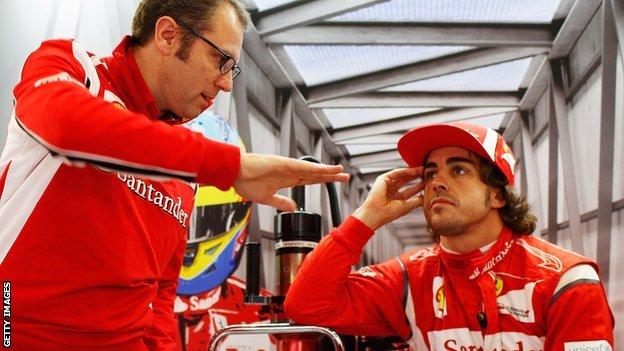 Sunday morning at the British Grand Prix... the office of Ferrari team principal Stefano Domenicali in the Silverstone paddock.

The tyre-related dramas of the afternoon are still four hours away and Domenicali's mind is on what he describes accurately as his team's "worst performance of the year".

"For sure I'm not happy," he says of a situation in which Fernando Alonso, arguably the greatest racing driver in the world, had qualified 10th fastest.

Alonso is sitting just the other side of the wall from us in the Ferrari motorhome and Domenicali candidly admits - as the Spaniard had the previous afternoon - that he does not know why Ferrari are so slow on a track where traditionally they have been competitive.

It is an unwelcome turn of events for the team in a year in which, until recently, they had appeared to be closer to the ultimate pace in F1.

Ferrari, who have won a record 15 constructors' titles, have been behind the best in terms of ultimate performance throughout the five-year lifetime of the current set of regulations and through two different Ferrari technical directors.

It's true that Alonso could have won the title in two of the past three years, had Ferrari not made a terrible strategic error in the final race of 2010 and had he not been caught up blamelessly in the pile-up triggered by Lotus's Romain Grosjean at the start of last year's Belgian Grand Prix.

But both those campaigns were characterised by Alonso driving brilliantly in an inferior car. Ferrari's outright pace has simply not been good enough since 2008, the year after their last title victory when Kimi Raikkonen topped the points.

"At the technical level, managerial level, in the level of our facilities, at all levels we need to improve," Domenicali admits.

"I have the responsibility of trying to improve the situation and to give the right people the right delegation to do their job.

"For sure the fact we have lost the championship at the last races in two of the last three years is not helping because it is adding more pressure.

"Even if we did not have the best car, by winning the title everything would have been swept away, but that's life. So it is a matter of staying calm and trying to react and improve things."

Domenicali identifies the black art of using the exhausts for aerodynamic effect as a key area where Ferrari are still trailing their rivals.

This has become a crucial car design feature in recent years, as teams harness the exhaust gases to blow on certain downforce-creating parts at the back of the car; Ferrari's arch rivals Red Bull are doing it with greater success than everyone else.

Ferrari have been revising their technical team in various ways over the last couple of years and, before too long, are expected to have another high-profile addition.

BBC Sport's sources say the highly regarded English engineer James Allison, who left his position as Lotus technical director in May, has already signed a contract to go back to Ferrari, where he worked during the era of Michael Schumacher's domination of F1 in the early part of this century.

Team boss Stefano Domenicali will not confirm it, saying: "We will see. We will speak about this when there is something we can say." There is a smile and a twinkle in his eye as he says it.

There has this year already been one big admission that Ferrari recognise they need to improve on the technical front - the revelation at the launch of the new car that the South African Rory Byrne (chief designer during the Schumacher era) was back working on F1 after several years concentrating on the development of the LaFerrari road car.

Domenicali says Byrne - the only man who can claim to match the standing of Red Bull chief technical officer Adrian Newey over the past 25 years in the sport - is acting "as a sort of senior expert or mentor on the work of the 2014 project".

Byrne's role is a recognition by Ferrari that, with their last drivers' title now six years ago, they cannot afford to make any mistakes with their first stab at the rules. Byrne, Domenicali says, will continue working on F1 all through next year, too.

"We are closer in the [overall] mix between qualifying and race, for sure," Domenicali says. "There is still a bigger difference in qualifying.

"But the area where I believe we are not really on top of is the exhaust effect. I'm not an engineer, but this is relevant in certain conditions of the track, certain types of corners. I believe that is the area where they are still better."

Next year, that will not be a problem. The new 1.6-litre V6 turbo engine rules require a central exhaust position, meaning it cannot be used to aid aerodynamics.

It is not just performance that has let Ferrari down this year, though. They sacrificed a probable 30 points over two races in Malaysia and Bahrain through operational errors. After his "lucky" third place and Red Bull driver Sebastian Vettel's retirement at Silverstone, Alonso is 21 points off the championship lead.

The surprise in those mistakes was that, last year, with a less competitive car, Ferrari and Alonso kept themselves in title contention with a no-risk pit-wall strategy based on maximising what was possible.

The outside impression early on this year was that, with a quicker car, they had forgotten that.

They failed to order Alonso into the pits at the end of lap one in Malaysia after he had damaged his front wing on the back of Sebastian Vettel's Red Bull on the wet first lap, hoping it would last long enough to be changed at the same time as the car was switched from wet to dry-weather tyres.

Then, in Bahrain, after Alonso's DRS overtaking aid stuck open and he had pitted to have it fixed, he activated it on his return to the track and it stuck again, requiring a second stop on the very next lap.

Domenicali denies there had been a change of approach.

"The outcome may have been what you say, but not because there was an intention of changing the approach to the races," he says.

"In Malaysia, after the contact, you have to take a decision. There were 30 seconds. You may think that is enough or not. In normal conditions, we would have called the car back in straight away. But there was still load on the car and the feeling was good. He was second - very close - with no problems.

"The problem is that we had a situation where [within] three laps maybe the track was going to dry. So from a position of disaster, not scoring points, you could have scored points and maybe one more lap could have been enough to do what we were thinking and change the wing.

"Retrospectively, of course, it was a mistake. I have no problem to say that. But it was not done intentionally to do something different.

"It is important to say it was not a lack of decision, it was a wrong decision."

He admits Alonso was told not to press the DRS button again, but says it was a "normal" reflex reaction to the beep the drivers get in their ears when the device is active and can be used.

"I don't want to go into these things because it seems we are making accusations," Domenicali says. "We as a team did a mistake. Full stop. And it was very unfortunate because it was a race where easily second place was there. Easily."

If the on-track approach has not changed, though, Domenicali does admit to a change in tactics off it.

That does not mean Red Bull-style public complaining to try to engineer a better competitive position. Of this, Domenicali says: "If you all make noise, you go deaf. That is my style. The people who are shouting, I don't even consider what they are doing."

But it does mean a more aggressive approach when he considers rivals to be breaking the rules.

So whereas last year Ferrari chose not to protest against Red Bull on a number of occasions when they might have done, this year they did lodge an official complaint against Mercedes' use of a 2013 car for a Pirelli tyre test - which has since been declared illegal by governing body the FIA.

Equally, Ferrari's power behind the scenes remains formidable. Evidence for this can be seen in the 2014 rules.

Ferrari successfully forced a rethink from four-cylinder engines to V6s, ensured the possibilities for aerodynamic research have been cut, and successfully campaigned for the limited re-introduction of in-season testing.

"On that, we were very transparent," Domenicali says. "For us, these things are very important for the future of F1.

"There is a bilateral view that Ferrari needs F1, but F1 needs Ferrari. This is something connected to the benefit of this sport. Try to take Ferrari away from F1 and the situation would be different."

81 comments
Back to top
unknown