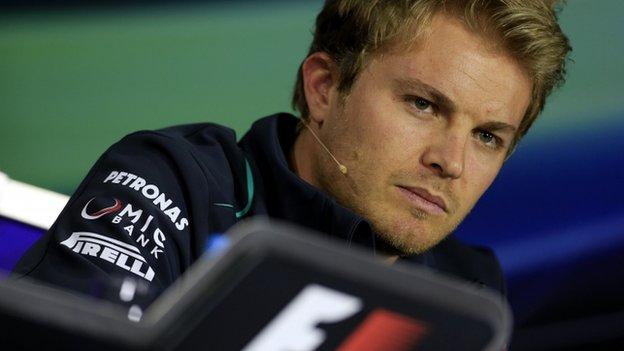 Mercedes driver Nico Rosberg says he is out to "annoy" championship leader Sebastian Vettel, but is not yet thinking about his own title challenge.

The German, who has won two of the last three races, said he was simply focusing on continuing his good form.

"It's too early to say we are title contenders and I'm just focusing on keeping the momentum going," he said, ahead of Sunday's German Grand Prix.

"I don't really want to speak about titles yet.

"Short term, I just want to annoy Red Bull and Sebastian by being ahead of them race by race."

Nico Rosberg is bidding to become only the third German to win his home race. Michael Schumacher has triumphed four times, while his brother Ralf has won the event once

Rosberg won the British Grand Prix last weekend, after inheriting the lead when initial leader Lewis Hamilton, his team-mate, suffered a tyre failure and then Vettel retired with a gearbox failure.

The teams are using a new design of tyres at the Nurburgring this weekend after six drivers suffered failures during the race at Silverstone.

Rosberg said he expected the tyres, which will use Kevlar rather than steel in their construction, would alter the relative competitiveness of the teams.

The revised tyres were run briefly in a damp practice session in Canada last month.

"It's early days," he said. "We ran them in Montreal but didn't learn much because of the weather.

"We need to run them as much as possible in relevant circumstances but it will be interesting and it may shuffle things around a bit.

"It's very likely it will have an impact and it will be interesting. Possibly it will mix things up a bit and it's also an opportunity to understand it better and earlier."

"Hopefully the different tyre is safer for all of us, Silverstone was not we want or satisfactory. How much different or better the tyres will be is hard to judge.

"It's hard to know [whether it will favour one team over another]. Pirelli have to supply tyres and if you like it or not is up to you."

Vettel said Red Bull had sourced the problem that led to a broken fifth gear affecting his gearbox.

"We've understood and fixed the problem," he said.