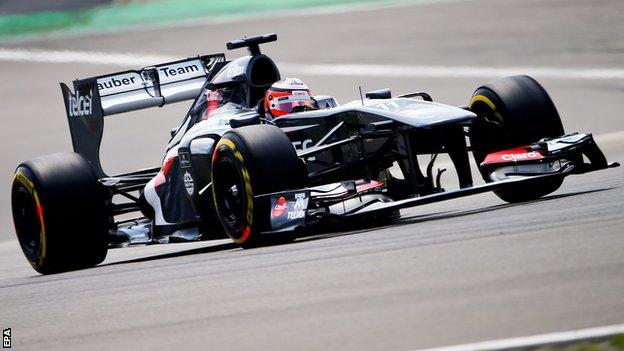 Russian teenager Sergey Sirotkin has joined Sauber with a view to him racing for the team next year.

The deal for the 17-year-old to be fast-tracked into F1 is part of an investment in Sauber by a group of Russian companies.

A statement from the Swiss team said they would set up a development programme for Sirotkin "to prepare him as racing driver for the team in 2014".

A spokesman added: "The goal would be to have him in our car next year."

Sirotkin races this year in the Formula Renault 3.5 series and lies eighth in the championship, with a best result of second place.

This extensive co-operation will showcase Russian innovation at the pinnacle of motorsport. At the same time, the Sauber F1 Team will have a solid foundation to increase its competitiveness on a long-term basis.

On the face of it, he does not qualify for the 'super-licence' required to be an F1 driver, and would have to win the Renault 3.5 championship to ensure he did.

However, there is a catch-all clause that Sauber could use to argue his case, which states a driver must have "consistently demonstrated outstanding ability in single-seater formula cars".

Sauber's race drivers this year are German Nico Hulkenberg, who is expected to move on next year, and Mexican Esteban Gutierrez, who also owes his presence in the team to sponsorship from his home country.

Sauber have been in financial trouble for some time and the deal with a group of Russian companies secures their future for the next few years.

The spokesman said there had been no change in shareholding at the team "for the time being", with founder Peter Sauber retaining two-thirds of the shares and team principal Monisha Kaltenborn one-third.

The Sauber statement said: "This extensive co-operation will showcase Russian innovation at the pinnacle of motorsport. At the same time, the Sauber F1 Team will have a solid foundation to increase its competitiveness on a long-term basis."