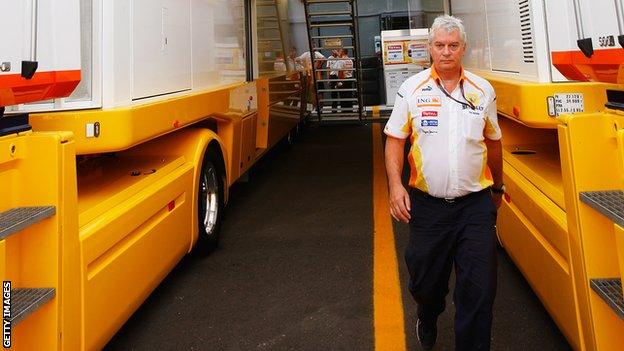 Williams have signed engineer Pat Symonds as their chief technical officer as part of a reshuffle aimed at reviving their fortunes.

But he was also found guilty for his part in fixing the 2008 Singapore Grand Prix and banned from F1 for five years.

The winners of the 2012 Spanish Grand Prix have not scored a point this year and have split with technical director Mike Coughlan with immediate effect.

"I'm honoured to be asked to play a role in returning the team to its rightful place at the pinnacle of Formula One," Symonds said.

He was a fixture at the team that is now Lotus, but which has gone through a series of guises as Toleman, Benetton and Renault from its inception in the early 1980s until 2009 and he built a reputation as one of F1's foremost engineers.

He was then found guilty, along with team boss Flavio Briatore, of arranging for Nelson Piquet Jr to deliberately crash in Singapore in 2008 to help team-mate Alonso win.

Symonds returned to F1 as a consultant with Marussia last year and was this year allowed to attend races in a formal capacity again for the first time since the ban.

"Williams is a team steeped in success and engineering excellence," he added.

BBC Sport understands these are the first of a series of changes planned at Williams in the coming months.

"His technical capabilities and sporting successes speak for themselves and I'm sure that his knowledge and leadership will contribute considerably to the success that all of us at Williams are working hard to achieve."

O'Driscoll added: "Our commitment to return Williams to winning ways is absolute and this appointment is yet more evidence of our collective desire to return the team to the position it deserves."

102 comments
Back to top
unknown