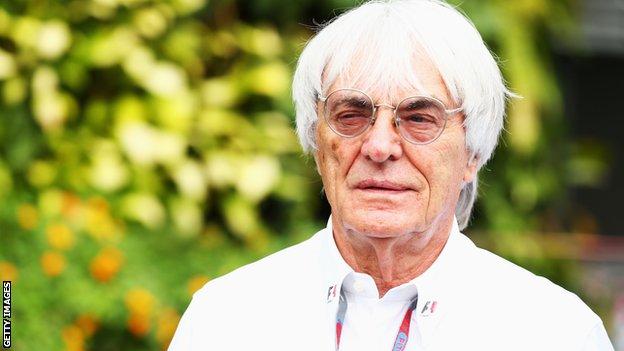 With Bernie Ecclestone, the myth is so much wrapped up in the man that it is often hard to separate fact from fiction.

This son of a Suffolk trawlerman has ruled Formula 1 for nearly 40 years with a combination of astuteness, cunning, sharp practice and sheer intellectual power arguably unmatched across business and sporting worlds.

He has turned what was essentially a minority activity for enthusiasts into the most-watched global sport outside the Olympics and football's World Cup.

Along the way, he has made enemies and won admirers - sometimes in the same person - but standing trial on bribery charges in Munich in August presented him with one of his biggest challenges yet. A challenge that could have seen him imprisoned for a decade.

In the event, Ecclestone paid a German court £60m to end the trial, in which he was accused of paying a German banker £26m to ensure that a company Ecclestone favoured could buy a stake in F1.

Under German law Ecclestone was able to pay to end the trial. His personal wealth is put at $4.2bn by Forbes.

In the normal business world, any chief executive who is the subject of such serious criminal charges cannot hope to hold on to his position.

Any chief executive who has referred to women as "domestic appliances" or praised Adolf Hitler for being "able to get things done" would have been shown the door with a haste to match the indecency of the remarks.

Not Ecclestone, who survived those particular storms - and many more.

Why? Probably because of his remarkable achievements, his all-pervading influence in F1 and, since the sport began trading as a commodity, his success in making money for his bosses.

That last attribute may yet keep him in a job, now that the criminal bribery case has ended, which was more serious than a related civil case in London's High Court, which has now been dismissed.

His boss - CVC chairman Donald McKenzie - has, before now, told the High Court that Ecclestone would have to be sacked if he was convicted of a criminal offence.

There is another case pending - and related - in the United States, where financial firm Bluewaters has sued him, claiming it was the highest bidder in the sale of F1 in 2006.

Whether any of this is the end of the road for a man of rare influence and notoriety or not, it has been a long one.

Ecclestone's journey began in the 1950s, when he was a less-than-successful racer and then a manager of promising British F1 driver Stuart Lewis-Evans.

When Lewis-Evans died in a fiery accident in 1958, Ecclestone disappeared off the motor racing radar for the best part of a decade, re-emerging in the late 1960s as the manager of another promising driver, Austrian Jochen Rindt.

By then, Ecclestone was already very wealthy, although some way off the billionaire he is today.

A former used-car salesman, he has a standard answer to anyone wondering where the money came from: "Property." But many have speculated whether he might have earned the money less legitimately.

For years, there has been gossip that he was involved in the planning and preparation for the Great Train Robbery, when £2.6m was stolen from a Royal Mail train in Buckinghamshire in 1963.

In an interview with the Independent in 2005, Ecclestone addressed the long-running rumour.

"There wasn't enough money on that train," he said. "I could have done something better than that."

He said he believed the rumours began because of his relationship with Roy James, a racing driver who drove the getaway car.

"Roy was very friendly with Graham Hill and, when he came out of prison, he asked me for a job," said Ecclestone, who owned F1 team Brabham at the time.

"I wasn't going to let him drive for me. Instead, I gave him a trophy to make. He'd also been a silversmith and goldsmith. That's still the trophy we give to the promoters every year. He made it. The recipients don't realise that."

In that answer, so much of Ecclestone is revealed: the hint of a potentially shady past; the attempt to make a joke of a tricky situation; the ultimately credible - and humorous - explanation.

After Rindt was killed in a crash in 1970, Ecclestone bought Brabham in 1972, thereby becoming a member of the Formula One Constructors' Association (Foca), the group that represented the teams.

As the 1970s progressed, Ecclestone became increasingly influential and eventually suggested that the teams let him take responsibility for negotiating the television rights for the sport. Until then, that was done on a somewhat haphazard race-by-race basis.

Whether Ecclestone foresaw even then the enormous earning potential remains a matter of conjecture, but he wasted little time in building his influence.

In his position as the man who could exploit F1's commercial rights, Ecclestone persuaded television companies to buy F1 as a package, rather than pay for individual races. That guaranteed vastly increased exposure, ensuring that the sport's popularity grew, at first slowly and then increasingly quickly.

The system he set up endures to this day. In short, the teams grant him permission to run the TV rights. In exchange, he gives them an annual payment.

But, over the last two decades, the power has shifted, helped by two decisions made by the sport's governing body, run at the time by Ecclestone's friend and long-time associate Max Mosley.

The first, in the mid-1990s, meant Ecclestone's own company became the rights holder of F1, taking over from Foca.

Ecclestone remains a man of unsurpassed authority in F1. Little goes on without him knowing about it. Little happens without his approval

The decisions followed an investigation into F1 by the European Commission, which concluded that it was a conflict of interest for one body to hold legislative, sporting and commercial power over the sport.

To those in the know, however, the solution changed little in the running of F1. Mosley was still in charge of the legislative arm, while Ecclestone held the commercial power. Together, they worked to further their own ends.

Ecclestone benefited enormously from the new situation, but it arguably led to the 83-year-old's current predicament.

One of the many financial transactions that led to F1's current ownership was the sale by German bank BayernLB of its 47.2% stake in F1 to CVC in 2006.

German prosecutors believed Ecclestone paid the money to Gribkowsky to steer the sale of F1 to CVC as it had agreed to retain him as the sport's boss.

While the wheels of German justice have been turning in recent years, some in F1 believe they have detected a dimming of Ecclestone's powers.

There was the decision to shuffle last year's grand prix calendar to accommodate a race that turned out not to exist, for example. Then there was his failure to prevent the introduction of a new engine formula, which has gone ahead this year despite Ecclestone's four-year campaign against the idea.

He remains, though, a man of unsurpassed authority in F1. Little goes on without him knowing about it. Little happens without his approval.

He cannot go on forever though, and various names have been bandied around as potential replacements.

Whoever takes over, and in whatever circumstances, it is hard to see any single person stepping into Ecclestone's shoes.

That says a lot about the size and scope of the job, but just as much about the remarkable abilities of a remarkable man.

Whatever anyone thinks of Ecclestone and his methods, the fact he seems effectively irreplaceable is about as powerful a tribute to his qualities as it is possible to get.