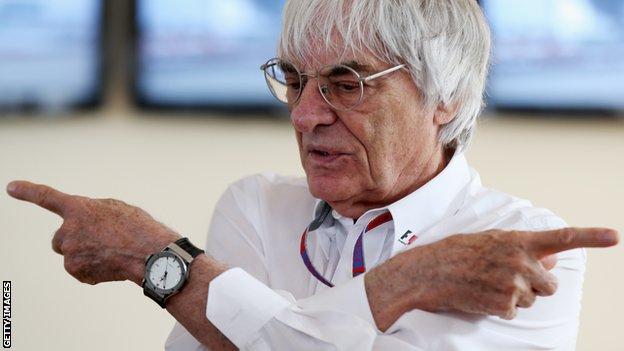 Among the topics Gary discusses this week are:

- Bernie Ecclestone being indicted on a bribery charge

- Ferrari's challenge to get their car right

How much will the Bernie Ecclestone scandal affect Formula 1? ‏‪@PaulThompson89‬

It has the potential to affect it a lot. Bernie made F1 into what it is today. I don't know of anybody who could take over his role. People criticise his methods but I don't think anybody else could do the deals he does.

I worked for him way back in the 1970s, so I sort of know how he operates - and he works in the same way now as he did then, only on a much bigger scale, with more zeroes on the end of the numbers. As a bloke who can pull the strings and make it happen, he is a one-off.

He's getting old and now he has this problem with the bribery case in Germany. So someone will have to do it, but it will change the face of F1 when he does disappear for whatever reason.

Is Felipe Massa too slow, or is he just slow enough (to not bother his Ferrari team-mate Fernando Alonso)? ‪‬‏‪@andrewsillett‬

I don't think Massa is too slow; I think he is too inconsistent. On his day, he is a very quick driver, but the problem is you never know when that day is going to be. He doesn't know the level of the car.

He over-drives a lot, and that leads to mistakes. When the car is good, he's quick and he can be consistent and get good results. But he has become too inconsistent to continue at a team of the level of Ferrari.

Now that this week's 'young-driver' test is partially being used to assess new tyres being introduced for safety reasons, should Mercedes have been allowed to take part? ‏‪@arankin27172‬

No. They went and did the Pirelli test in Barcelona in May with their 2013 car, which was breaking the rules. Their punishment for doing that was to be banned from the young-driver test. The young-driver test has now changed a little bit, but Mercedes have to pay a penalty and I think the penalty was very small for what they did.

Ferrari's inability to get their car right just never seems to go away. Is it technology or personnel that need to change at Maranello? ‏‪@MickGaskin10‬

Personnel, in my view. Change is the wrong word in some ways. They need more strength in depth.

They can hit it lucky. Take last year as an example. They started with a very poor car and made it into an average car and they ran it differently. They didn't take risks; they just took out of it what they could and they almost won the world championship. This year, they started with a car that was a lot better but they have gone backwards.

They need more people to generate more ideas. The information we have at BBC Sport is that former Lotus technical director James Allison is going there and he will be a good addition. But he has to go there with the technical control to operate in his way. If they tie his hands, they are wasting their time.

Does Paul Di Resta have what it takes to win the world championship? ‏‪@Martin_Glass96‬

As a driver, Di Resta is as talented as necessary to win races. Whether he can win world championships or not, the biggest thing that lets him down is his attitude. In F1, if you're going to win the world title, you need everyone around you. Every member of the team needs to be pulling for you and really be on your side. And Paul doesn't know how to create that environment for himself. He has a lot to learn and he doesn't seem to be learning it.

Will Williams ever be more than a midfield team again? ‏‪@EarlKirby‬

That's a tough one. They have made changes, with technical director Mike Coughlan leaving and Pat Symonds coming in as chief technical officer.

Pat will be a good guy for making sure the systems and the people all operate in the right way, but they are still lacking a leader who has the necessary vision and knowledge.

As a company, Williams has a huge amount of momentum if it's going in the right direction - we saw that last year, when they won in Spain with Pastor Maldonado and were only let down afterwards by some silly driving.

If they can get the momentum going, yes, they can get back to the front. They have the history of success, but history is very difficult to repeat. Patrick Head and Adrian Newey, who ran the technical side through their heyday, are exceptional. They are missing that person now.

Do the unique driving styles of each driver influence tyre performance considerably? Or is it more down to the design of the car? ‏‪@Ben_Slabbert‬

When the tyres are new, the more aggressive style will give you more return. But if a driver doesn't know how to tame that come the longer runs, it will eat the tyres up. So the driver needs to be very open-minded and be able to adapt to different circumstances.

Why is it not faster to fill cars with enough fuel to race flat out over the entire race rather than under-fuelling? @Rickzer14‬

It's a chicken and egg situation. The more fuel you put in, the heavier and slower the car is. As a rough average over a season, 10kg of fuel is about 0.33secs slower per lap. The teams will look at things like detuning the engine slightly, changing gear slightly earlier, and run the numbers to see where the best compromise is in terms of the ultimate overall race time. They also take into account the expected race pace, and sometimes they get that wrong - the race might be faster earlier on than you thought, in which case you will use more fuel and have to save it later.

Why did the FIA not make exhaust outlets end at the back of the car to stop this channeling of gases once and for all? ‏‪@lozzercozzer‬

That is a good question, and if I was writing into Ask Gary, I'd be asking the same thing. When the FIA was trying to ban exhaust-blown diffusers in the summer of 2011 ahead of the 2012 season, that was the original plan and they wasted the opportunity.

They allowed the teams to convince them not to do that, and instead to stipulate an area on the rear bodywork where the exhausts could exit and look at where we are now - teams are still harnessing the exhaust gases for aerodynamic effect, albeit not to the same extent as in 2011.

It has led to an enormous amount of expense in brake duct and diffuser design to try to optimise this system and it will all disappear next year because finally the exhausts will exit straight out of the back of the car. It's typical of F1.

Do you think McLaren's pace will improve by next year? ‏‪@F1Valledy‬

McLaren look as if they are lost in the wilderness. Some of the developments they introduced at the last race in Germany were the best I have seen this year from them.

They were thinking outside the box in terms of the rear brake-duct design. But they are not attacking the fundamental cause of the problem, which is the front wing design in my opinion.

They are trying to fix problems that are being created by the overarching flaw in the car. And until they fix that, they won't sort it out. Like Williams, they have lost their visionary people, and they need one. So I would question whether they will be better next year.