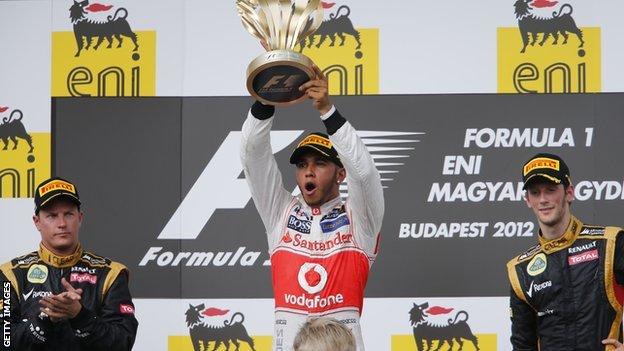 The Hungarian Grand Prix is a tough race for the Formula 1 teams and drivers on a number of levels.

The first is the Hungaroring track does not get used a lot, so it is always very dirty and the circuit improves a lot through the weekend.

So the teams that have the best belief in their simulation tools are at an advantage. It's very easy to confuse yourself by what they call 'chasing the track' in Friday practice - ie making too many changes to the car to suit the circuit in the condition it is then, when it is going to change dramatically as it gets cleaned up through the weekend.

If you do that, by Sunday you can end up losing yourself, and the car's set-up will be nowhere near what you need.

It is a very demanding track for both drivers and cars, because of the long corners and the fact there is very little room for a breather.

At both the start and end of the lap there are two 180-degree corners one after the other; and the middle sector is just one long succession of medium-speed corners, broken up by a chicane.

That makes it very difficult to prepare the tyres correctly for the optimum qualifying lap.

It is hard to get the front tyres up to the right operating temperature at the start of the lap, so it is very easy to make a mistake, run wide and lose time in Turns One and Two.

But if a driver does have the tyres working at the beginning of the lap, it is very easy to have overworked them before he gets to the last two corners.

So tyre management in qualifying is vitally important and that will be made all the harder this weekend because the teams are using a new specification of tyre at a race for the first time, introduced to prevent the multiple failures at the British Grand Prix.

What the car needs

The Hungaroring is a high-downforce track, but not quite as much as in the past.

It used to be very much like Monaco, in that you bolted on as many downforce-producing parts as you could, no matter what the penalty in drag.

But a layout change in 2003, which lengthened the pit straight and removed a chicane after Turn 11, has changed the emphasis slightly, so the teams are now looking for maximum efficiency of highest downforce, and the drag penalty of parts is taken into account more than it was.

For a fast lap time, a car needs to have good front-end grip, while traction and an ability to ride the kerbs are also very important.

That is one of the reasons Red Bull always go well there. Their car produces a lot of downforce at low speed, which is what you need for the Hungaroring.

The Red Bull runs with a lot of rake compared to the other cars - ie the front is a lot lower than the back.

That is what helps their car at low speed. It gets the front wing lower down, which makes it work more effectively at lower speeds, and the wedge shape underneath the car improves the underbody aerodynamics.

And their effective use of the exhaust gases to blow in the area where the floor meets the rear wheels 'seals' that gap and means they can run the rear high without the floor 'leaking' and losing downforce.

Equally, the way Sebastian Vettel drives is very good for slow-speed corners - he uses the brakes to get the nose pointed into the apex and then stamps on the throttle early to gain the rear downforce and traction from the exhaust gases working the aerodynamic parts at the back of the car.

However, we saw in Monaco that the Mercedes is also very good on that type of track - but high temperatures are forecast for the race, as they often are, which is not going to make their ongoing struggle to stop the rear tyres overheating any easier.

The heat adds to the demands on the drivers that are already there because of the track layout. There is no rest on that track. The same goes for the brakes - it's important to keep the average temperature under control as they don't get much of a rest either.

The brake temperatures also influence the tyre temperatures, which may help the teams who are better at keeping the tyres cooler - such as Lotus, Ferrari and Force India.

And because everyone has very little experience on the new tyres, this race will be a journey into the unknown for everyone.