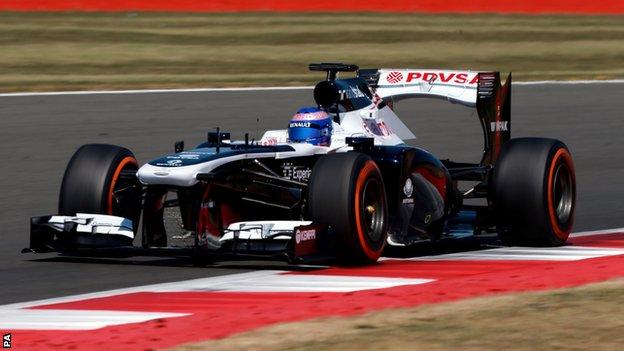 Susie Wolff had a lot of preconceptions to break down in her first full test in a Formula 1 car.

The 30-year-old Scot was battling the prejudices of those who believe women will never make it in F1, that they are just not suited to it.

She was fighting the impression that she was simply not good enough, the legacy of her seven largely unsuccessful years in the DTM German touring car championship.

And there was the identity of her husband, Toto Wolff, a Williams director when she was appointed to her role of the team's development driver and still a shareholder following his switch to Mercedes as motorsport director and executive chairman of the German giant's F1 team.

By the end of a day's running in the Williams at Silverstone, she had not convinced the doubters, judging by some of the negativity that has been in circulation since last Friday.

She was 0.4 seconds slower than fellow novice Daniel Juncadella had managed the previous day in the same car in similar conditions and a second off race driver Pastor Maldonado. Clearly, the doubters said, they had been right all along - she simply wasn't good enough.

But is that what the test showed? Let's take a closer look at what happened...

For a start, testing times are notoriously unreliable as indicators of true form.

This is the case even with drivers in the same team on the same day, as teams do not reveal information about how they run their cars - and fuel loads, tyre choice, set-up, ambient temperature, wind direction and so on can all make a dramatic difference to lap times.

This explains why Wolff was using as her benchmark the lap of one minute 34.631 seconds Juncadella achieved on the second day of the test, and not the 1:34.098 he managed on the first.

That's because the wind direction changed between day one and day two, making the track slower.

These conditions remained fundamentally similar over days two and three, and it seems Wolff and Juncadella were driving cars in more or less similar specs when they set their fastest times.

Married to Toto Wolff, Mercedes director of motorsport and executive director (business) of the Mercedes F1 team. Shareholder in Williams

The Spaniard is 22 and races in the DTM, to which he moved after winning the Formula Three Euroseries last year.

Wolff is not racing this season. She did a short acclimatisation test in the Williams on Silverstone's International circuit in damp conditions in October last year, a few days before her final DTM race, and had a run in a Formula Renault 3.5 car in June to prepare her for last week's outing. Other than that, she had not driven a single-seater on a race track since a season in British F3 in 2005.

Of course, as Williams's development driver, Wolff has spent considerable time in the team's simulator, but that only helps so much.

"The sim is a very good tool at helping you get up to speed because you know exactly where the braking points are, you know the track well," she said.

"But let's be honest, sitting in a sim is not like being out there and going through Maggotts/Becketts trying to hold the thing flat.

"On my first lap I had my heart in my mouth a little bit and you don't get that in a sim. It's a great tool but of course it has its limitations."

On top of that, Wolff was expected to go for a quick lap time before Juncadella.

On his first day of the test, Wednesday, Juncadella's fastest time came on his 22nd timed lap of the day, at 16:19, and he did a total of 30 flying laps. He went for a time after three runs of six, five and four flying laps each, which would have afforded him some time to change the settings of the car to his liking.

Juncadella got another go on Thursday afternoon, this time setting his best time on his 12th flying lap, again after initial four and then three-lap runs.

She said she was aware she had only a "handful of laps" before being given a chance to go for a time on new tyres. She wasn't kidding.

Williams will not reveal details of the drivers' programmes, but it's clear from the timing sheets and what little they did say that Wolff had to do a series of eight aerodynamic tests, where the car is not driven to its limit, so the team could check the performance of various parts on the car. And then it was straight into the new-tyre runs before lunch.

There were no timed laps in the afternoon because the team spent it doing pit-stop practice with the race team, to try to iron out the mistakes that had cost them their best chances of points in a difficult season at the previous race in Germany.

Unsurprisingly, she did not get the best from the car, struggling to use the tyres in the optimum way, a recurring problem even for regular race drivers.

"The medium tyre is quite tough to get the fronts and rears in at the same time," Wolff said. "I struggled quite a bit with the fronts on the first flying lap and then, when the fronts were in, the rears were already starting to go."

After setting that first time, she had another run, and all but matched her best time, this time setting 1:35.186. But that was on the fourth lap on that set at a time when the tyres were already beginning to go off. Again her inexperience had cost her. "There was more potential there, definitely," she said.

"My goal was a 34, so I just missed that," she said. "I always said I wouldn't be doing this if I didn't think it was possible and I believe in myself.

"It's quite hard after such a tough end to my DTM career. Many people assumed because I was always at the back that I just wasn't quick enough. Today can show that possibly that's an unfair judgement.

"In DTM it is difficult to get in the right position to be in a winning car. I was never in that position. So it was about going out there and showing what I could do. As much as I was nervous about today, I also saw it as a brilliant opportunity to show people what I was capable of."

Where she goes from here remains to be seen. It looks like there will be no runs in Friday practice at races this season and she has not decided whether to apply for an F1 licence, and her 2014 programme remains up in the air.

But at Silverstone, given the context, Wolff did more than enough to prove she deserves a lot more respect than she has been getting.