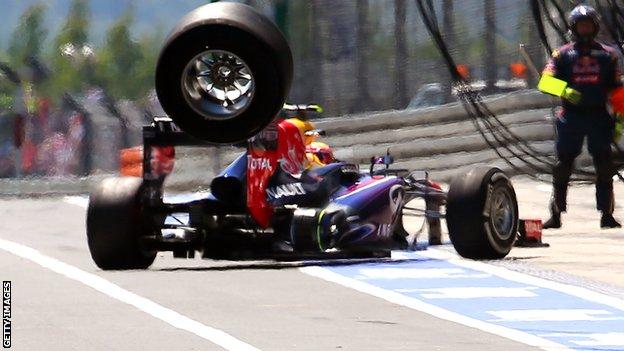 Formula 1 teams will be given a 10-place grid penalty if they send a car out of the pits with a loose wheel.

The new rule has been implemented after a cameraman was injured in an incident at the German Grand Prix this month.

It will apply to all practice sessions as well as qualifying and races.

The pit-lane speed limit has also been reduced in practice sessions, from 100kmh to 80kmh.

A rear wheel came off Mark Webber's Red Bull at the Nurburgring. A mechanic inadvertently pressed the button that indicates he has finished attaching a wheel after his hand slipped on the wheel gun.

The FIA, motorsport's governing body, is working with the teams to try to come up with a device that will ensure the wheels cannot come loose. This is expected to be introduced in the next two or three races.

There has been some discussion of imposing a minimum pit-stop time, but Webber said he felt the teams should still race to complete stops in the shortest time possible.

If they find a solution to increase the pit-stop time to improve safety and it is the same for all the teams, I think no-one will disagree

"I think there still needs to be a competition in the pit lane." said Australian Webber, who will quit F1 at the end of the season.

"Motorsport is dangerous. We know that. Maybe there are ways to keep the competition but have less technology.

"I'm sure they'll find a way so there is still competition but maybe make it a bit safer."

"When something happens in terms of safety, we must react," said the double world champion.

"I don't think anyone would disagree with improving safety - teams, drivers, media, promoters - but it is difficult to find an agreement on the way to do it.

"I think reducing the speed limit is something that cannot be bad because it is the same for all the teams and it is less risk for the competitors.

"In terms of you guys [the media], reducing maybe the number of people in free practice can be a solution, as well because sometimes it is true that there are too many people.

"If they find a solution to increase the pit-stop time to improve safety and it is the same for all the teams, I think no-one will disagree."

The sport has also relaxed its total ban on television reporters and cameramen reporting from the pit lane.

For this weekend's Hungarian Grand Prix, each live broadcaster will be allowed one reporter and one cameraman in the pit lane during practice.

Only cameramen from official broadcaster FOM are permitted during qualifying and the actual race, but they must stay on the pit wall.

Further restrictions have also been imposed on written journalists and photographers.

After the German GP earlier this month, photographers and reporters were banned from the pit lane during qualifying and the race, other than "approved media", who would be allowed on the pit wall.

But an FIA statement said a total of 25 passes for journalists and photographers would be issued for each practice session in Hungary.