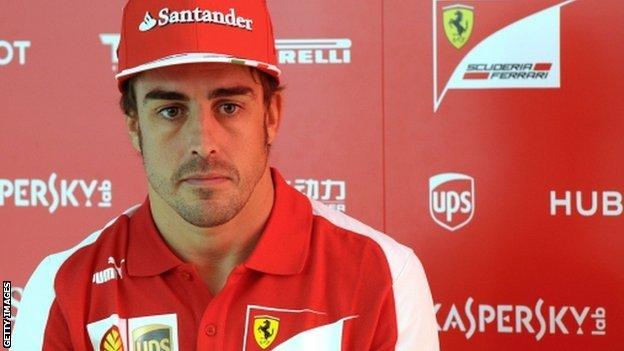 Fernando Alonso says it is "important" he does not lose any more ground to title rival Sebastian Vettel at Sunday's Hungarian Grand Prix.

"It will be good motivation for the team and good for our hopes if we can close the gap a little," Alonso said.

"If the gap increases it will be a stressed summer break for us, so it's an important weekend."

With the points system we have, a lot of things can happen very quickly

Hungary is the 10th grand prix of the 19-race season, and after it there is a four-week break until the championship restarts in Belgium at the end of August.

During the break, teams are required to close down their factories for a two-week period and do no work at all.

Vettel has won four of the nine races so far this season for Red Bull, including two of the last three - and he would have won in Britain at the end of last month had his car not suffered a clutch-shaft failure while he was leading.

But he denied that the championship is already within his grasp.

"No, not at all," said Vettel, who has won the title for the last three years. "I'm not really thinking about it.

There are still many races to be raced and many points to be given out, so anything can happen

"Obviously we have one more race here before we have a bit of a break, which I think is a good time to reflect on the first half of the season and try to look back on what we have done, where we can improve and then go step by step.

"The second half of the season will be extremely tough, with lots of races in only a few weeks, and with the points system we have a lot of things can happen very quickly.

"It is a very good position we are in at the moment. But first of all we'll focus on this one and then try to look forward to the second half, not thinking too much about the championship."

Raikkonen, who finished a close second to Vettel at the last race in Germany, is expected to be strong this weekend as his Lotus works well in the forecasted high temperatures.

The Finn said: "There are still many races to be raced and many points to be given out, so anything can happen."