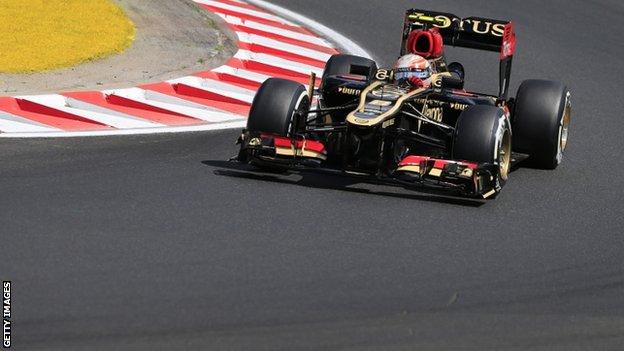 McLaren's Sergio Perez was third fastest - but crashed heavily at the fast Turn 11 when trying to improve.

World champion Sebastian Vettel was only fourth in his Red Bull, with Mercedes driver Lewis Hamilton sixth, ahead of Red Bull's Mark Webber.

The results leave an opaque picture ahead of the start of qualifying at 1300 BST as Vettel's position is almost certainly not an accurate representation of his competitiveness.

The German was fastest in both sessions on Friday and spent most of Saturday morning running on heavy fuel and the harder 'medium' tyre as he did his homework ahead of the race.

Vettel did go out on lower fuel and with the 'soft' tyre at the end of the session but was 0.395 seconds slower than Grosjean's best of one minute 20.730 seconds.

Grosjean's team-mate Kimi Raikkonen, battling for the championship with Vettel and Alonso, was only 11th fastest.

Perez, who was 0.447secs faster than Button, was angry with himself after the crash, which has disrupted what had been up to that point a promising weekend for McLaren, who appear to have made progress following the introduction of a series of new parts on the car.

Hamilton had been fastest of all on the 'medium' tyres in the first part of the session, just under 0.4secs ahead of Grosjean, but made less progress when he fitted the 'soft' tyres.

BBC F1 technical analyst Gary Anderson said: "It's going to be a great battle. Hamilton confuses me. Great time on the harder tyre but perhaps did not find as much time as the others on the softer tyre.

"I think the Red Bulls will be very strong but Romain Grosjean is up for it and he knows if he can start from pole position it's a good chance for a race win."