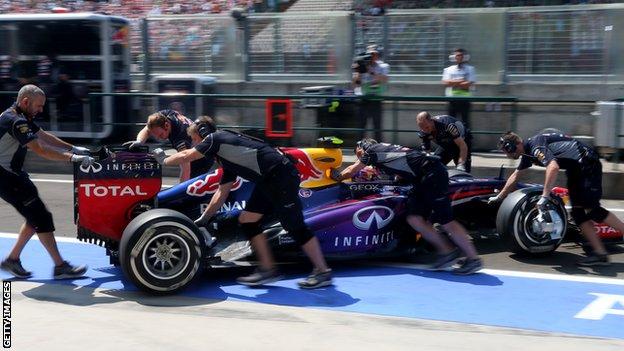 Mark Webber says Red Bull look "stupid" after the latest in a series of problems on his car left him 10th on the grid for the Hungarian Grand Prix.

Problems with his gearbox and Kers power-boost system cost him more than half a second in lap time.

"Massively frustrating. We look stupid, it's embarrassing and it's a brutal circuit to be out of position on," Webber said.

"We should be challenging for the front row and we're 10th."

Webber was leading the last race in Germany when a rear wheel came off because it had not been properly secured in a pit stop.

And his Kers problems in Hungary were the latest in a series of recurring problems with that device and others on his car in the past few years.

Webber said: "All the effort you go to and two races on the bounce we get that.

"We didn't have Kers and we had a basic downgrade of upshifts, so the upshifts were very slow.

"We've left a lot of lap time in the garage and we're massively out of position, and it's going to be hard to get the points maybe we should have got."

Webber's frustration was heightened because he was competitive with team-mate Sebastian Vettel in Friday practice.

"After such a good day yesterday, I was very quick," he said.

"There are options but we have to get on top of the problems first. We can't race the cars like this, it's 16 or 17 seconds of [total] race time."

Red Bull team principal Christian Horner said: "With Mark we had a disastrous session. We lost electrical supply to the gearshift so he lost the quick-shift and the Kers and that's minus 0.8secs and just to get to q3 was a massive result for him.

"That's why we elected not to run to take a strategic approach so we have freedom of tyre choice tomorrow [Sunday]."

Drivers that get into the top 10 shoot-out and set a lap time have to start the race on the tyre they qualified on.

Not doing so means Webber can now choose whether to start the race on the harder 'medium' tyre - as he is most likely to do - or run the less durable 'soft', which the top eight will be on.