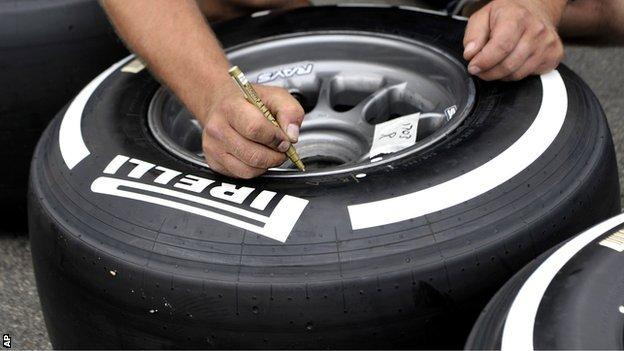 Formula 1 cars could use wider tyres next season because supplier Pirelli is concerned the current dimensions will be unsafe.

Tyre will be under more stress next year because the new 1.6-litre turbo engines are expected to produce more power and torque than this year's 2.4-litre V8s.

Pirelli believes this means it will have to supply tyres with a bigger 'contact patch' with the track, to reduce stress.

The company is to decide later this week whether to demand the change.

Pirelli has asked for further data from the teams on their projections for performance in 2014 and will make the decision after reviewing it.

But it seems highly likely that it will insist on the bigger tyres because current data from the teams suggest the cars will be considerably faster next season than had initially been anticipated and that tyres of current dimensions may struggle to cope.

The company has cited safety reasons for the expected need to switch, so governing body the FIA will feel it has no option but to agree, especially following a series of failures there have been with Pirelli tyres this season.

Pirelli's request has become political because 10 of the 11 teams want the tyre dimensions to remain the same, while Mercedes are open to the change.

Pirelli has asked for the rear-tyre width to be increased by 20mm to 400mm and for the diameter to increase from 660mm to 690mm.

It believes the tyres will need to be able to provide a 10% increase in longitudinal grip to cope with the greater power and torque from next year's engines.

The majority of the teams are against the change because a new tyre shape has an effect on the aerodynamics and potentially suspension design and other design parameters of the cars.

When the new rules for 2014 were introduced, it was expected the new design of engines would produce in the region of 750bhp, with 600bhp from the engine and turbo and 150bhp from enhanced energy recovery systems.

But the latest projections suggest the total power output could approach 850bhp, with as much as 700bhp produced by the engines and turbos alone.

That would mean power outputs about 70bhp greater than this season.

On top of that, the teams have been able to produce more aerodynamic downforce from the new chassis regulations than had been expected.

The new rules have greatly reduced the drag produced by the cars, so they can complete races with a new mandatory fuel restriction of no more than 100kg. Currently, there is no restriction and teams use about 140-150kg of fuel (about 210 litres) in a race.

The initial intention was to ensure the cars in 2014 would be no more than five seconds a lap slower than this year but the teams now believe cornering speeds will be only slightly down on this season.