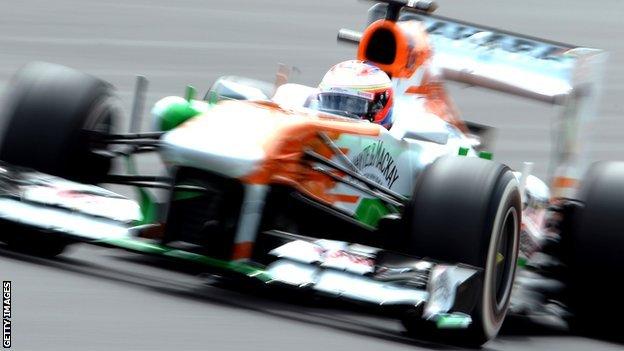 Calado, 24, who races in the GP2 feeder series, impressed at a Silverstone test this month and is likely to drive in Friday first practice sessions.

A Force India spokesman said a deal was not yet in place, but there was a "good chance" it would be soon.

"The team were impressed by him at the young-driver test and there is a vacancy for a third driver," he added.

Force India have traditionally used a third driver in first practice on Friday over the last few years.

Their current race driver Paul Di Resta fulfilled the role in 2010 before being promoted to the race team in 2011, and they followed a similar pattern in 2011 and 2012 with Nico Hulkenberg, who is now at Sauber.

Last year, Force India employed Frenchman Jules Bianchi as their reserve and he narrowly missed out on being promoted to the race team this season.

Calado is one of the most highly rated drivers bidding for a promotion to F1.

He was runner-up in the British Formula Three Championship in 2010 and the GP3 series in 2011.

He was fifth in GP2 last year, following two wins, and is in the same position this season after taking four second places.

Meanwhile, McLaren have said they will try to find a seat in F1 next season for Dane Kevin Magnussen, a member of their young driver programme.

Magnussen, 20, set the fastest time on the first day of the Silverstone young-driver test and is currently leading the Formula Renault 3.5 series, which is about the same level as GP2.