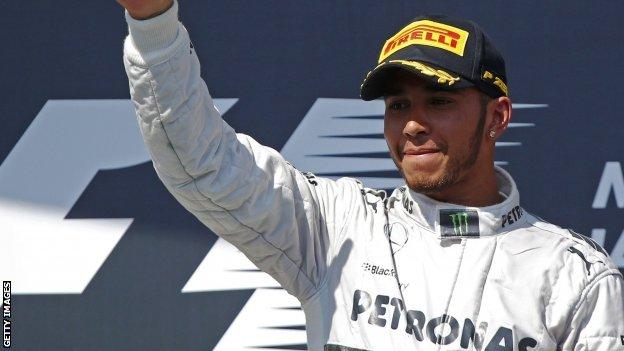 Lewis Hamilton has not yet reached his ultimate potential with Mercedes, according to team boss Ross Brawn.

Hamilton dominated the Hungarian Grand Prix on Sunday, and has taken three pole positions in the last three races.

But Brawn said he was still adapting to his new team.

"When a driver of Lewis's calibre joins a team, there is massive expectation but every driver takes a little time to settle in, to understand the nuances," Brawn said.

"It has taken a little while but I see great signs, particularly the last few races."

His form suggests he can mount a title challenge.

Hamilton was leading the British Grand Prix before dropping to the back of the field with a tyre failure and recovering to finish fourth.

Despite that, he has scored more points in the last three races than any other driver.

Asked about his title chances, Hamilton said: "It's too early [to talk about it] at the moment. [But] of course it's definitely in the back of my mind."

He added that he felt he had a car that was quick enough to win every one of the remaining races.

"I truly believe in this car. It feels awesome," he said.

Hamilton struggled a little to adapt to the Mercedes car at the start of the season and was out-qualified by team-mate Nico Rosberg for three races in a row in Bahrain, Spain and Monaco.

But he is now getting to grips with it - the qualifying score after 10 races is seven-three to Hamilton - and Brawn said the Englishman would keep on improving.

Brawn said: "It's our big challenge to maintain that [momentum]. Our hit rate [on developments] has been pretty good this season - things that we have brought to the track have generally worked and we've got some things coming up in the next few races that could give us the impetus and momentum to take us through the year."