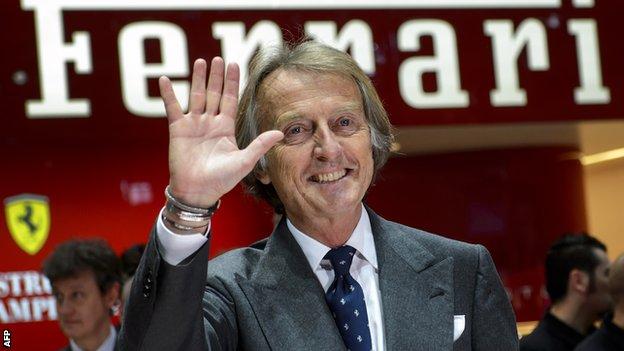 But the Italian said he had no regrets about reprimanding his star driver for making remarks critical of the car.

Di Montezemolo said Ferrari "must" get back to early-season form, when Alonso took two dominant victories in the first five races.

But he said he admonished the Spaniard because he "didn't like some attitudes, a few words, some outbursts" from him.

Alonso had said after the Hungarian Grand Prix, where he finished fifth in the last race before Formula 1's month-long summer break, that as a birthday present he would like "someone else's car".

Ferrari comes before everything, the priority is the team...

Di Montezemolo, who also addressed the team last week to make it clear they must improve their performance, said: "Fernando is a great driver and I understand him. He is a bit like me: he wants to win.

"He must just remember that one wins and loses together and, for its part, Ferrari must give him a car capable of starting from the front two rows. It doesn't sit well with me seeing our car is not competitive.

"That's why I intervened, even if I didn't want to abuse my authority over my men. However, it had to be done.

"We started so well, we had begun the world championship with a very competitive car, maybe even considered the best.

"But something happened and instead of moving forward we went backwards.

"Therefore the right attitude, the one I am taking from now on, is as follows: understand the mistakes, fix them and after this careful analysis, develop the car in the right direction.

"We must put our heads down in this return match, as I describe this second part of the season after the break."

Alonso heads into the final nine races of the season, starting with the Belgian Grand Prix on 25 August,39 points behind championship leader Sebastian Vettel of Red Bull with a maximum of 225 available.

The 32-year-old has not won since the Spanish Grand Prix in May, and the car has been increasingly uncompetitive over the last four races, in which he has finished second, third, fourth and fifth.

Di Montezemolo said: "Firstly, our DNA, Ferrari's and mine, has a characteristic that we never give up. We must get back on the path we were on up until Barcelona. We can do it.

"Secondly, Spa and Monza (the next two races) are two circuits that could suit the characteristics of our car.

"Yes, the conditions are in place to give a strong signal of a recovery and, on top of that, I expect results from our engineers who must demonstrate their worth."

Justifying his decision to phone Alonso on his birthday - 29 July - to make it clear his comments after Hungary had been unacceptable, Di Montezemolo said: "Fernando has given a lot in these last years and I repeat, his disappointment, which came about mainly after Silverstone, where all of us expected to be more competitive, is understandable.

"But I didn't like some attitudes, a few words, some outbursts. And I said so.

"I reminded everyone, including the drivers, that Ferrari comes before everything, the priority is the team.

"Rather like a family father pointing out the need to respect some family rules, I wish to underline the concept of family values."

He also made it clear to Alonso's team-mate Felipe Massa, who is out of contract at the end of the year, that he needed to up his game.

"Felipe is a quick driver and a great guy," Di Montezemolo said. "But in the past days, we were very clear with him: both he and us need results and points. Then, at some point, we will look one another in the eye and decide what to do."

Di Montezemolo would prefer to keep Massa. But if he does not, Ferrari's order of preference for potential replacements is Sauber's Nico Hulkenberg, Force India pair Paul Di Resta and Adrian Sutil and Marussia's Jules Bianchi.