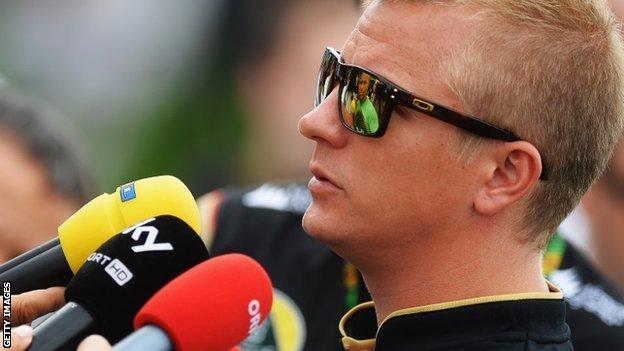 Kimi Raikkonen will not attend Thursday's media sessions ahead of this weekend's Belgian Grand Prix after his Lotus team said he was feeling unwell.

The 33-year-old's future has been much debated, with BBC Sport's F1 chief analyst Eddie Jordan saying the Finn wants to move to Ferrari next season.

Jordan thinks a deal could be announced at next month's Italian Grand Prix, but Ferrari have denied the claim.

Raikkonen is still expected to take part in Friday's first practice at Spa.

Meanwhile, Raikkonen's manager Steve Robertson said his driver would be happy to stay at Lotus for a third season if they can provide assurances about their financial and technical future.

"If the team can provide him with the answers he is seeking, which will ensure he has a car that can fight for race wins and the championship, then he will stay."

Raikkonen will be chasing his fifth Belgian Grand Prix win on Sunday as he looks to close the 38-point deficit to Red Bull's championship leader Sebastian Vettel.