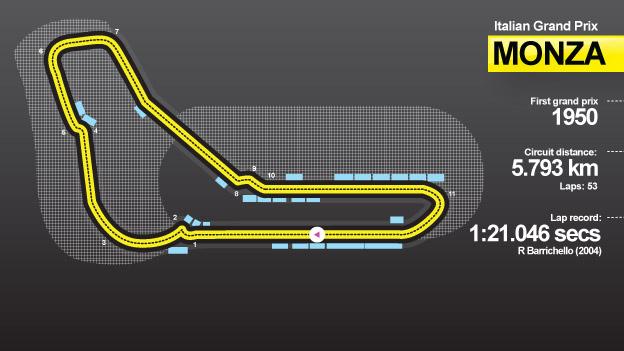 The final race of the European leg of the season sees the world of Formula 1 descend upon the legendary Monza circuit for the Italian Grand Prix this week.

Motorhomes will be assembled for one final time before the teams head off for seven 'fly-away' races outside of Europe to finish the 2013 season.

Can Sebastian Vettel win to further strengthen his grip on the world title?

Or will Fernando Alonso secure a victory that would help him close the gap on the championship leader?

The Spaniard will be relying on Ferrari's famed support at the circuit to roar him on.

Monza is one of the fastest circuits on the Formula 1 calendar, but it is also one of the most difficult to overtake on. Of the last 13 races, 10 have been won by the driver on pole.

One of the best opportunities for overtaking is on the straight after the Parabolica corner. Cars that successfully stay close enough to the one in front through that corner are well placed for making a pass.

Long straights form a significant aspect of the Monza layout and with the cars reaching speeds of over 200mph, a low downforce set up is important. Consequently teams produce Monza-specific front and rear wings to minimise drag.

Having held a race in all but one of the Formula 1 season's since 1950, Monza is a circuit and destination seeped in history.

In fact, should a fan who attended the circuit's first grand prix be transported through time to the present day, they will hard pressed to see much difference at the circuit, with little having changed over the past 73 years.

Monza is famed for its atmosphere, with the passionate 'tifosi' full of vocal support for their beloved Ferrari, turning the stands into a sea of red. Italians often refer to the circuit as "La Pista Magica" - the magic track.

Should a Ferrari driver win the race, the podium can become a daunting place for those who finish second and third, as fans of The Prancing Horse invade the track and surround the podium.

Monza, the home of the Italian Grand Prix, is a true theatre of motor racing. The place oozes atmosphere and the race is always one of the highlights of any Formula 1 season.

Ferrari - the team are inescapable there - is the central character in a long-running drama to which history has added depth and meaning.

The race takes place against the backdrop of a lovely city in early September.

Cool, misty mornings usually give way to hot, sunny days. The trees cast moody shadows on the celebrated track, which has seen so much - both triumph and tragedy.

The ghosts of the past seem to seep out of the circuit's structure, especially at the old concrete banking, now long disused but still a reminder of what went before.

And through it all there is Ferrari, a link between the past, the present and the future.

The woods in the famous royal park throb with the support of the hundreds of thousands of fans who flock to the place carrying banners for heroes past and present, willing their team on to the victory that would send the place wild, as it last did in 2010.

No pressure, then, Fernando…

Red Bull's Sebastian Vettel: "This track brings back great memories for me, mainly from my first win there in 2008 with Toro Rosso. I can't describe the feeling of standing on the top of the podium for the first time, and Monza was one of the best places to experience it because of the thousands of passionate fans that stand beneath, it gives you goosebumps."

Red Bull's Mark Webber: "I like Monza a lot because it's very Formula 1 in terms of its history and its atmosphere. All of the greats have raced there and I have an affinity with Italians from my Minardi days. The track is one of a kind, it's an incredibly fast circuit with high top speeds, so there's a lot of heavy braking. The Tifosi really make the atmosphere of the weekend - they go ballistic and they're very passionate about a certain red team."

McLaren's Jenson Button: "I've always loved Monza. I really enjoy circuits that have a bit of history to them, and Monza has that in abundance - it's one of the greatest tracks on the calendar. When you have the car hooked up beneath you, you get into a special kind of rhythm around Monza: you're going so fast that the whole lap just flows together. There's nowhere quite like it."

Lotus's Kimi Raikkonen: "It's true that I have never won in Italy. For one reason or another things just haven't worked out for me, but it doesn't mean I can't drive the track. Just because I have not won at a circuit in the past it doesn't mean that I won't win or get a good result there in the future."

Lotus's Romain Grosjean: "It's a race I wasn't allowed to contest last season and as a racing driver all you want to do is race, so I can't wait to take to the track for the first time in practice on Friday morning. It's a very historic venue; a beautiful circuit in a fantastic location and racing there is always great. I have to admit, though, it's not only the racing I'm looking forward to, as Italian cuisine is superb. I'll be visiting a couple of restaurants during my stay."

Sauber's Nico Hulkenberg: "Monza is the only true high-speed circuit of the season. I still remember sealing my GP2 title there in 2009. After the race on Sunday morning I was the champion."

The 1988 Italian GP is famous for two reasons - it was the event that spoilt McLaren's winning clean sweep of all that year's races, and it was a Ferrari one-two at home only a month after the death of the team's legendary founder Enzo Ferrari.

Between them, Ayrton Senna and Alain Prost won 15 of the 16 races in 1988, sweeping all before them in the brilliant McLaren-Honda MP4/4.

With Senna and Prost having locked out the front of the grid, they were the overwhelming favourites to claim another victory at Monza.

Prost got the better of Senna early in the race but the Brazilian fought back to reclaim the lead by the end of lap one.

For the next 34 laps, nothing changed at the front of the grid and it looked as though McLaren were set for a one-two until Prost pulled out with engine problems on lap 35.

With two laps to go, Senna was taken out by the Williams of Jean-Louis Schlesser and Ferrari took full advantage, with Gerhard Berger taking victory ahead of team-mate Michele Alboreto.