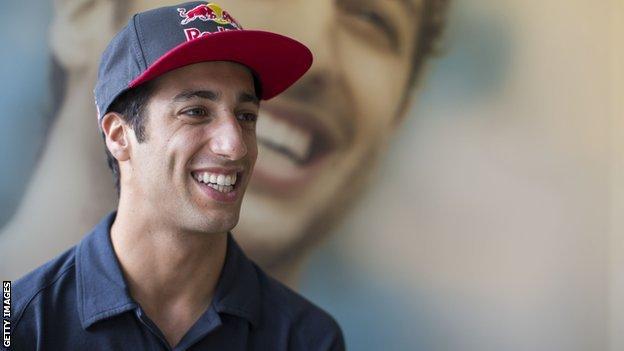 Team principal Christian Horner said Ricciardo was "very talented, committed, has great attitude and in the end it was a very logical choice".

Ricciardo said: "Obviously there's a lot of excitement running through me.

"Since joining F1 in 2011, I hoped this would happen and over time the belief in me has grown."

The decision was widely expected after Webber, who is leaving F1 to join Porsche in sportscar racing next season, made it clear at the last grand prix in Belgium that the team had already decided to promote Ricciardo.

Horner added in a team statement: "He's got all the attributes that are required to drive for our team. He's got a great natural ability, he's a good personality and a great guy to work with.

"Daniel knows what the team expects. He'll learn quickly and it's very much a medium- to long-term view that we're taking in developing him.

"The seat within the team is a wonderful opportunity and I think he's going to be a big star of the future."

Ricciardo will be expected to play a supporting role to Vettel, around whom Red Bull is focused.

It remains to be seen whether he can cope with the added pressure of driving for a front-running team competing regularly with rivals such as Raikkonen, Lewis Hamilton and Fernando Alonso.

In his career at Toro Rosso, Ricciardo has occasionally produced highly impressive qualifying performances but has struggled to be as convincing in races.

Red Bull insiders have acknowledged that there are question marks over his ability to deliver at the highest level.

Raikkonen is a proven winner but was demanding a bigger salary than the Australian, might have been less compliant if asked to support Vettel and the team had questions over his willingness to work hard on the technicalities of F1.

Ricciardo added: "Next year I'll be with a championship-winning team, arguably the best team, and will be expected to deliver. I'm ready for that. I'm not here to run around in 10th place, I want to get the best results for myself and the team.

"It will be a great challenge to be up against Sebastian Vettel; I'm looking forward to that.

"My aim is to finish this season as strong as possible, for myself and Scuderia Toro Rosso. Then, once the off-season is here, I'll be fully focused on next year and the next stage of my career."

Red Bull chief technical officer Adrian Newey likened the team's decision to promote Ricciardo to that of his former team Williams to sign Damon Hill to partner Alain Prost when Nigel Mansell left the team at the end of his title-winning season in 1992.

Hill went on to become team leader following the death of Ayrton Senna in 1994 and won the world championship in 1996.