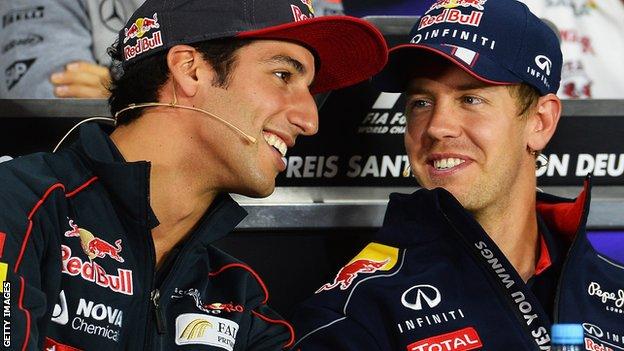 Ricciardo, 24, replaces Mark Webber, who is leaving F1 to join Porsche in sportscar racing next season.

"He'll get the same chance, the same equipment and it will be down to what he does on the circuit that counts at the end of the day."

The Australian has driven for Red Bull's junior team Toro Rosso for the last two seasons, making him the "logical" choice.

"Daniel has really earned his place in the team," added Horner.

"He tested really impressively with us earlier in the summer and obviously we have been keeping a close eye on his performances in Torro Rosso and therefore it was logical to give him a drive."

Ricciardo, who won the Formula Three championship in 2009, made his F1 debut at the British Grand Prix in June 2011.

Since then he has competed in 41 races and picked up 22 points with his best finish coming in the Chinese Grand Prix in April when he finished seventh.

"He's a really exciting prospect," added Horner. "He's got a good character and personality, he's always got a smile on his face, but most importantly he's seriously quick."