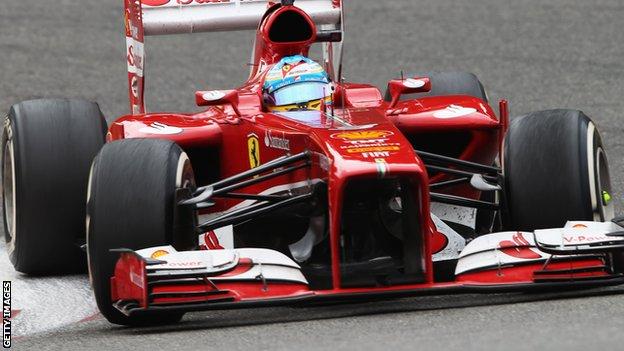 Fernando Alonso has pledged to see out his career at Ferrari and dismissed claims he tried to move to Red Bull.

Red Bull insiders have told BBC Sport Alonso pushed hard this summer to join them and the idea was taken seriously before they chose Daniel Ricciardo.

"It was only rumours," said Alonso. "A lot of rumours - about Red Bull, about a sabbatical year. So many rumours.

"I have three and a half more years with Ferrari, which I intend to respect and hopefully increase a little."

Alonso, whose Ferrari contract runs to the end of 2016, said that taking a sabbatical next year was "never an option", adding: "I am in the best moment of my career, with the best experience and performing at the best time.

"I will not lose any opportunity [to race] now. I know I am still in very good shape for maybe four, five more years, so for these for sure I will give 100% of my passion, which is motorsport.

"After these four or five years I will see what condition I am in and if I am performing well."

Alonso, who won the world championship with Renault in 2005 and 2006, joined Ferrari in 2010 and came agonisingly close to winning the title in both his first season with the team and last year, losing out to Red Bull's Sebastian Vettel both times.

This year, he is again the German's closest challenger, but ahead of this weekend's Italian Grand Prix Alonso is 46 points behind with 200 points still available in the remaining eight races.

"We are not at the moment achieving the results we want but we are working very hard," he said.

"Next year there will be new rules and it opens the door to many teams to stop Red Bull having the domination they have had the last couple of years so we have high hopes for next year's challenge."

Alonso said he was "optimistic" that he could close the gap to Vettel in the next two races, in Monza this weekend then in Singapore in a fortnight's time.

"[At the last race] In Spa we saw some steps forward from us and we hope to continue that direction and keep improving here in Monza," Alonso said.

"The characteristics of the track should help our performance as well so we have everything in place to do a good weekend.

"We need to deliver in the race but we arrive with some good confidence and ready to fight.

"For us, Singapore will be a stronger test, when we come back to [having to use] maximum downforce.

"There we will see how much of a step forward we did, but let's concentrate on this weekend and try to do the maximum and finish in front of our main rivals."

He said thinking of winning in both Monza and Singapore was "too optimistic" and that if Vettel continued to extend his advantage Ferrari would effectively have to write off 2013.

"So two podiums and finishing in front of Sebastian is the target for these next two races.

"If we cannot do so and we keep losing points, obviously we need to start thinking of the 2014 project because there will be only six or seven races remaining with a massive points gap. So important weeks are coming for us."