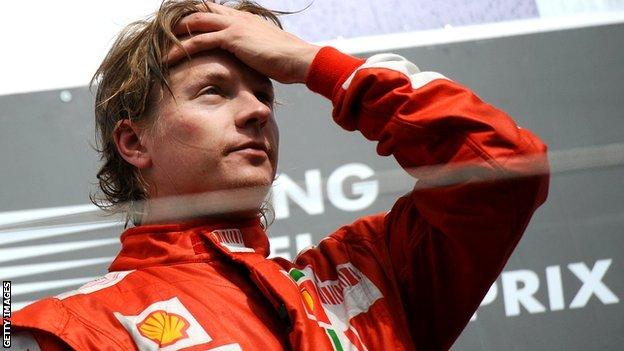 Never go back to an old love, they say.

Yet that is what Ferrari have done in signing Kimi Raikkonen to partner Fernando Alonso for the 2014 Formula 1 season.

For those on the outside, it is an enticing prospect. Two of the four men recognised as the best drivers in the world - the others being Lewis Hamilton and Sebastian Vettel - will be in the same team.

Two completely different characters - fire and ice. Who will come out on top? What a spectacle it promises to be.

But the auguries for it ending well are not good.

Ferrari have tended to operate on the basis of having a number one driver and a second who supports him. It's almost part of the DNA of the team. How will it work now they have decided to shift to a different approach - two drivers of equal status allowed to fight it out, theoretically for the benefit of all?

More to the point, what happened in the relationship between the team and the man who was that lead driver - Alonso - to make them want to change it in the first place?

First, some history, to put it into context.

The first time around

Raikkonen and Ferrari separated - effectively on the grounds of incompatibility - at the end of 2009, a year before the end of the Finn's contract.

He had been signed to replace Michael Schumacher, who won five consecutive titles for the team. The Finn was to be their new team leader.

Ferrari have historically preferred dynamic, forceful characters who stamp their authority on the team. Raikkonen is low-wattage. Simplistically, he just wants to drive as fast as he can, tell the engineers what he thinks and then leave.

If he gets beaten by his team-mate, so be it. He'll come back next time and try again. He is remarkably self-contained, almost completely impervious to the outside world.

That gives him unique strengths - strengths that Alonso, for example, does not have - but not ones that Ferrari tend to respond to.

Enter Alonso, also a great driver, but a very different character - dynamic, forceful, demanding. Ferrari wanted him; someone had to go.

It was a difficult decision. Raikkonen had won the world championship for them in 2007, but even then he and team-mate Felipe Massa had been closely matched and the title depended on Massa giving up victory in the final race of the season - his home race in Brazil - to Raikkonen, to ensure he could beat McLaren's Hamilton by one point.

Then, through 2008 and the first half of 2009, Massa out-scored Raikkonen, and was generally the slightly more convincing performer.

Massa came within a whisker of winning the title himself in 2008, and had more points than Raikkonen when he suffered a fractured skull in an accident at the 2009 Hungarian Grand Prix, forcing him to miss rest of the season.

Massa was recovering and Ferrari felt they could not leave him in the lurch. In any case, he had edged Raikkonen and all the signs were that physiologically he would be OK. So they paid Raikkonen to sit at home. He spent two years in rallying before returning to F1 last year with Lotus. 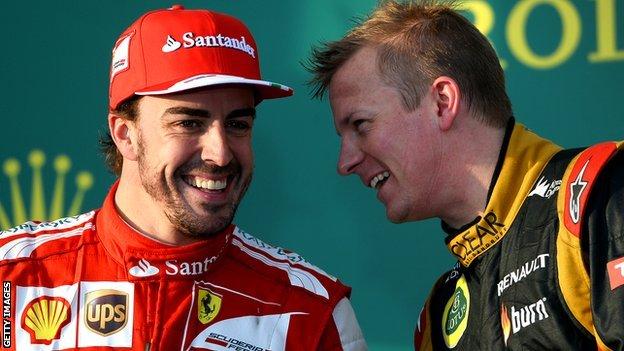 Where has it gone wrong with Alonso?

There is no question that Alonso has done a superlative job for Ferrari on track since he joined in 2010. In fact, it could be argued he has been hiding the poor performance of the car.

In both 2010 and 2012, he took the title to the wire against Vettel, with Massa generally nowhere, and in neither year could he realistically be blamed for losing it.

But towards the end of last year, cracks were beginning to show in the relationship.

There was, for example, a minor explosion in India when technical director Pat Fry said the drivers had not got the best out of the car in qualifying, to which Alonso did not take kindly.

After the agony of losing a 40-point lead in 2012 - simply through the sheer superiority of the Red Bull in the Asian races and some appalling luck for Alonso - 2013 was supposed to be the year the Spaniard finally won the title for Ferrari.

It started so well. The car was more competitive. There was a strong second - to Raikkonen - in the opening race in Australia.

But then it began to unravel. Alonso missed a chance to win in Melbourne because the team would not move Massa out of his way - just as they hadn't in 2010. He had to take his own initiative - spring a surprise early stop - to get ahead. By then, it was too late to catch Raikkonen.

Then in Malaysia he damaged his front wing against Vettel's car at the start and the team failed to order him in to the pits to change it. It tore apart heading into the second lap, sending Alonso out of the race.

He dominated China, and then in Bahrain the DRS overtaking aid failed, he stopped to have it reset, and then used it again on his first lap out of the pits despite being told not to. A possible second - or perhaps even a win - became an eighth place. And after four races Alonso was already 27 points behind Vettel in the championship.

Then, after a dominant win in Spain, the car's performance began to drop away. Alonso seems to have abandoned the nice-guy approach he took in 2012 and started to put pressure on the team, hoping it would have an effect.

It did - but not the one he wanted. Ferrari decided they didn't like being told what to do by their driver, at least not in the manner he was doing it.

At the same time, they began to look at his relatively poor qualifying performances compared to his scintillating pace in races and wonder.

Alonso, most agree, is blindingly fast, but not on balance quite as good a qualifier as Vettel and Hamilton.

Nevertheless, most - including his leading rivals - see the disparity in his performances in race and qualifying as proof of a) that the Ferrari lacks the outright performance of the Red Bull or Mercedes; and b) he is the best race driver in the world. Hamilton, who regards himself and Alonso as equals and better than anyone else, refers to him as "the fastest guy out there".

Ferrari, though, have begun to question whether Alonso is getting the most out of the car in qualifying, and concluded that things might have got a bit too comfortable with Massa. That Alonso could do with a bit more motivation - in the form of a team-mate who is more consistently able to produce his best form.

Some sources say things got so bad between Alonso and Ferrari that they considered paying him off at the end of this season, but that their sponsor Santander, the Spanish bank, would not accept it.

Either way, the inescapable irony here is that Ferrari have got annoyed with Alonso for being what they wanted him to be, and signed as a result someone who they discovered wasn't that the last time around.

How will it work out?

On paper, Alonso and Raikkonen is probably the strongest driver line-up in F1. In theory, it makes Ferrari a formidable force - assuming their car and, particularly, new V6 turbo engine is competitive in 2014.

But the potential for disruption is clear.

Alonso famously almost brought McLaren to its knees in his demands for priority status when he was teamed with Hamilton in 2007.

He has since made it clear that his problem was not with Hamilton per se, but with the team. Team boss Ron Dennis, it has emerged, had promised him he would be team leader, and then not delivered.

That is now what has happened at Ferrari, too. Worse, in fact. Alonso has been team leader for four years and has now been told he is equal with Raikkonen.

Ferrari, apparently, don't care how he feels about that, although he has told them he's fine with it.

How will Alonso respond? Will he behave in the manner of, say, Hamilton and Jenson Button at McLaren from 2010-2 and treat it as a challenge to enjoy, and see out his contract to the end of 2016, as he said he would last weekend? Or will he feel betrayed and seethe inwardly until a flashpoint triggers emotions he can't control?

Most insiders I have spoken to believe Alonso will probably edge the on-track battle with Raikkonen, that he will be faster more often than not.

If that's the case, it's not hard to imagine a scenario whereby Alonso is ahead on points, but there comes a race in which Raikkonen is in front and Alonso can't get by. Or perhaps the team mess something up for him. And that becomes the trigger point for a fallout that leads to Alonso leaving Ferrari at the end of next season.

And where would he go, I asked? "McLaren-Honda," EJ replied.

It will be a fascinating year.