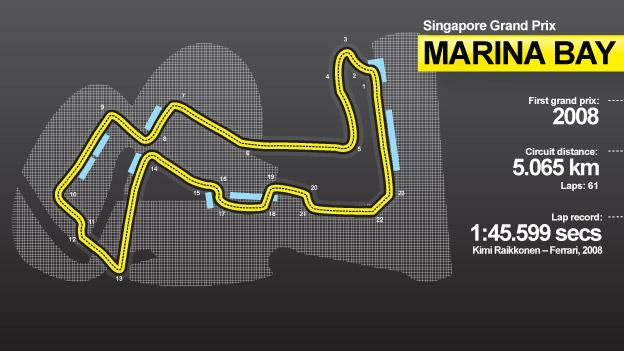 How do you transform one of the world's most densely populated cities into a twisting street circuit capable of hosting Formula 1's one and only night race?

On Sunday, Singapore will stop in its tracks as it hosts its sixth race around a 5.067km track that straddles the harbour of Marina Bay.

BBC Sport takes a look at what needs to be done to make one of the most glamorous races on the calendar run smoothly.

When does the work begin?

A 25,000-strong workforce begin preparations in May, four months before the race is due to take place. In a process rather like assembling the world's biggest Scalextric set, all race-related infrastructure will be taken out of a 38,000 square metre storage facility tucked away in eastern Singapore.

There are thousands of items including concrete barriers, fences, cables, temporary bridges, ticketing booths and portable toilets. In total, 4,395 safety barriers and 10km of debris - or 'catch' - fencing need to be erected.

A polymer modified binder, which was laid on the track surface to offer vehicles 20% more grip, is inspected and necessary repairs carried out to ensure it is fit for Formula 1. The lifespan of the road is expected to be extended more than five years beyond that of a normal road surface.

A week before the race, 650 tonnes of F1 equipment belonging to race teams will arrive by air and sea freight.

On the Wednesday before the race, the first of a series of gradual road closures begins in the Marina Bay area. A complete closure takes place at least an hour before each session, with access restricted to vehicles with the relevant passes.

After a final round of inspections, at 03:00 local time on Friday morning, the Marina Bay Street Circuit is officially open for F1 business.

And when does it end?

Road restrictions are gradually lifted once the race is over on Sunday, with the final road reopening to traffic in the early hours of Tuesday morning.

The rest of the temporary infrastructure - barriers, advertising hoardings, buildings - begin coming down almost immediately after the race, but the process is only completely finished up to a month after the race.

In the first few years of hosting the race, work would go on 24 hours a day, seven days a week. But in recent years, with experience, the majority of the workforce do normal five-day, 40-hour weeks.

But organisers say they still only have a month or so off before they have to start planning for the following year's race.

How do they light up the track?

The race requires 108,423 metres of power cables, 240 steel pylons and approximately 1,600 light projectors, all of which must be installed over a period of three months.

Formula 1 feels like a bubble, a strange parallel world, at the best of times - but that goes double at the Singapore Grand Prix.

The night-race schedule means most people working at the race stay on European time, which is seven hours behind Singapore.

So you eat dinner in the middle of the night, go to bed as the sun is coming up and wake up in the mid-afternoon.

Though it sounds surreal it works surprisingly well, but it does mess with the mind in curious ways - the most obvious being that there seems to be more time in the day than at other races.

The power requirement is 3,180,000 watts with an illumination measurement of around 3,000 lux - effectively four times brighter than floodlights in most football stadiums.

The entire track, including the run-off areas, has to be lit consistently. The lighting system used needs to minimise glare and reflections from wet surfaces or spray from cars should it rain.

And should one of the 12 twin-powered generators that creates the electricity fail, a substitute generator will kick in as a back-up. Each generator has its own dedicated engineer, waiting to solve any problems immediately.

What else do they need to do?

Apart from the track, organisers have to fill 700,000 square metres of public space with entertainment for paying fans. Last year, with a budget of £2.5m, there were 40 groups of entertainers, from bands to acrobats, performing on six temporary stages.

Fans need to be fed, so six to 10 days before the event, various vendors are allowed into the circuit to set up stall while 15 security companies are taken on to ensure the event runs safely and smoothly.

To ensure fans can get around the park easily, shuttle services, taxi stands and underground tunnels - the circuit goes over the top of six subway stations - are available.

What is the result?

The Marina Bay Street Circuit is the second slowest 23-turn circuit on the calendar after Monaco, with an average speed of 172kph. Approximately 46% of the lap is taken at full throttle, compared with over 75% at Monza.

The heat of the night in steamy Singapore

Singapore by night is a shimmering cityscape of tropical beauty, which each year turns into an arena of physical hell F1 drivers

The twisting layout is hard on the brakes, while the gearboxes also take a beating, with around 80 gear changes per lap.

Drivers will complete 61 laps in the race - in 30C heat and 70% humidity - which takes a little under two hours to complete.

A change to the circuit this year is at turn 10 - dubbed the Singapore Sling. The original layout, a three-turn chicane, was seen as dangerous by drivers with Kimi Raikkonen crashing there in 2008 and Lewis Hamilton describing it as 'the worst corner in Formula 1'.

This year, it has been turned into a single-apex left-hand bend and, without the chicane, lap times are expected to be lower.

What do the drivers think?

Red Bull driver Sebastian Vettel: "I think it's one of the toughest races of the year, so to win is an amazing moment and you feel you deserve the champagne! It's a very long race; the full two hours so the race just seems to go on forever. The circuit itself is a killer because there are so many bumps, there's no room for mistakes."

McLaren driver Jenson Button: "I remember the first time we raced at Singapore [in 2008]; it seemed incredible to think that we could hold a Formula 1 race at night. I must say, the thrill and novelty of racing through spot-lit streets is just as intense for me today as it was when we first raced there - it's a unique spectacle, and one that I think is brilliant for F1. In fact, the Singapore Grand Prix is one of the wonders of modern sport."

Lotus driver Kimi Raikkonen: "I really like going to Singapore. It's a great place to be, I love the local food, and I don't mind the unusual times we run in the car as it means I don't have to get up so early. I have some unfinished business after my three grands prix there so far, as I enjoy the circuit but have not yet had a podium."

Fernando Alonso may have led from start to finish to claim his second win on the Marina Bay circuit three years ago, but his battle with the hard-pushing Red Bull of Sebastian Vettel makes this a classic Singapore Grand Prix.

The race had gone 35 laps largely incident free until Lewis Hamilton - just five points off the top of the drivers' standings going into the weekend - was eliminated from the race following a crash with then championship leader Mark Webber.

After that, the focus was very much on the front of the pack as Vettel upped the ante on Alonso. The German kept himself around one second behind the Ferrari for the closing quarter of the race, and closed markedly over the final two laps.

Just one mistake by Alonso would undoubtedly have let Vettel in to snatch victory, but the Spaniard kept his nerve to cross the finish line just two tenths of a second ahead of the Red Bull.