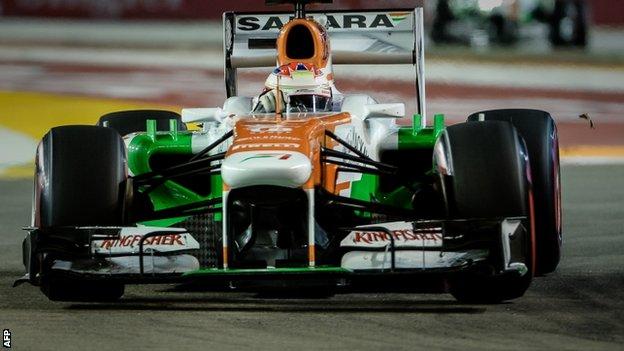 Force India are investigating the reasons behind an incident that left Paul Di Resta without a point for a fifth successive race.

Di Resta was on course for a place in the top 10 at the Singapore Grand Prix until he crashed his car into a barrier with seven laps left.

"For whatever reason, something went wrong," said the Scot.

"I did nothing different, but the car didn't stop. It locked the outside front wheel."

It was the second race in a row in which a crash ended Di Resta's hopes.

At the Italian Grand Prix, he collided with the Lotus of Romain Grosjean at the first chicane, .

After his car was pitched into a barrier at the Marina Bay Street Circuit, Di Resta again insisted that the crash had not been his own fault.

Honestly, I think I would have been fighting with Fernando for even a third place at one point because everything was fine

"There is a big question mark over what exactly went wrong," he said. "It would appear to be something mechanical.

"If it is something I've done wrong then I'll stick my hand up and take the blame for it.

"But it doesn't look like I've done anything wrong at the moment. The team are looking into it."

Di Resta had been running as high as third at one stage before making his first stop after 20 laps.

However, a safety car period five laps later, when Daniel Ricciardo crashed his Toro Rosso into a barrier, scuppered Di Resta's hopes of a big haul of points to end his barren run.

"The safety car didn't help us," added Di Resta, who had been up alongside the likes of Fernando Alonso and Felipe Massa and remains 10th in the drivers' standings.

"Honestly, I think I would have been fighting with Fernando for even a third place at one point because everything was fine.

"But we had the safety car and we had to pit to put the medium tyre on at the end.

"At that stage, I was quicker than Massa, a bit slower than the Mercedes, but I was catching a train of cars we would easily got through.

"So what happened in the end is galling."