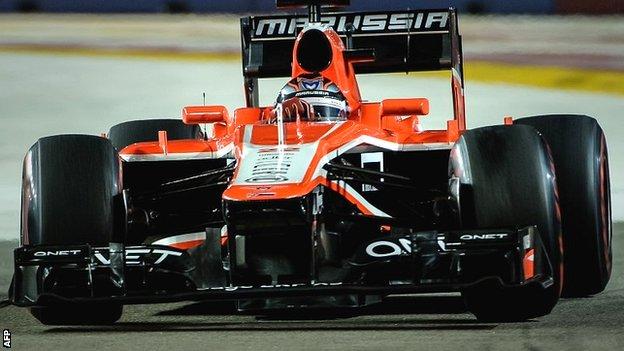 Jules Bianchi will drive for Marussia for a second Formula 1 season in 2014.

The 24-year-old Frenchman has impressed in his debut campaign with a series of fast and consistent performances.

Marussia have finished last in their three F1 seasons but Bianchi's has put them ahead of rivals Caterham with six races left.

Did you know? Jules Bianchi is the nephew of Lucien Bianchi, who won Le Mans in 1968

Bianchi, a member of the Ferrari driver academy, was an outside contender for the Italian team's second drive before they plumped for Kimi Raikkonen.

He has been linked with a number of other teams for 2014 but Marussia have decided to retain him.

Bianchi said: "I couldn't have wished for a more supportive environment in which to make my F1 debut and from the very beginning I have always felt completely at home with the team.

"We started the season well and while the challenge has increased as the season has developed, we have learned important lessons together that will place us in a much stronger position next year."

Marussia's second driver this year is Englishman Max Chilton, who has made it clear he wants to stay on in 2014.

Booth said Marussia would confirm their "full race driver line-up (for 2014) later in the season."