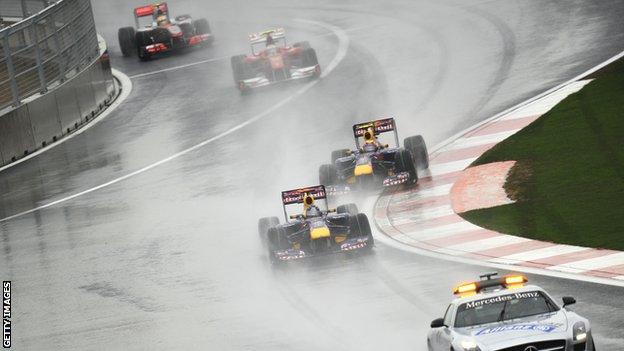 Formula 1 organisers are monitoring Tropical Storm Fitow that is passing through parts of Asia ahead of this weekend's Korean Grand Prix.

Weather forecasts suggest the storm is set to veer west of South Korea and into China, meaning it will miss Mokpo, where Sunday's race will be held.

While it may not hit South Korea, the storm could still cause heavy rain and strong winds to affect the region.

The first Korean Grand Prix, held in 2010, was disrupted by a heavy storm.

A huge downpour soaked the circuit, causing the race to be suspended for over an hour.

The wet conditions prompted a number of appearances from the safety car, while the race, which was won by Ferrari's Fernando Alonso, finished in darkness because of the delay.

There are just 150 points still available in the six remaining races.