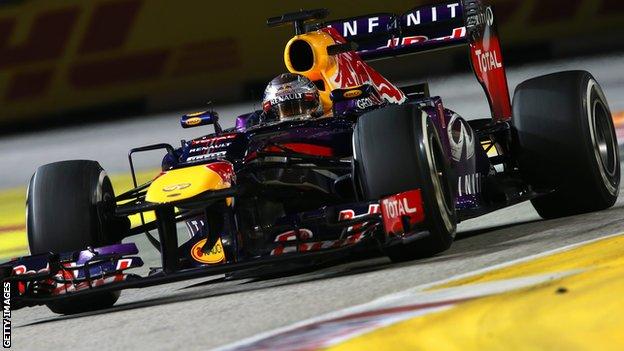 Sebastian Vettel's dominant performance in Singapore two weeks ago has got tongues wagging in Formula 1.

Vettel's Red Bull was more than two seconds a lap faster than his closest challenger on his way to victory.

There is a lot of chat about why he was able to pull away so quickly in the period after the safety car came in - when he built an advantage of 20 seconds in nine laps.

People think that's too much, and that there must be something dodgy going on. But, as usual, they aren't looking at the facts.

Who has questioned Vettel's speed?

Minardi said Vettel was able to accelerate much earlier than all his rivals, including team-mate Mark Webber, and that his Red Bull's Renault engine was making a "sound similar to the sound made by the engine when the traction control system was used in previous seasons".

Traction control, which maximises acceleration by preventing the rear wheels spinning, has been banned from F1 since 2009.

If you go back to basics, Vettel has proved time and again in the last few years to be exceptional at the start of grands prix. He regularly pulls out well over a second on the first lap. His feel for the car is obviously very good.

So, let's go back to Singapore. The field is behind the safety car. Vettel has not stopped for tyres so he knows the car and tyres he has under him.

Behind him, in second place, Nico Rosberg was in the same position on strategy, but he had bits of discarded tyre rubber lodged in the front wing of his Mercedes. Rosberg said in Korea on Thursday that his engineers had worked out that this cost him downforce worth 1.7 seconds a lap.

So for Vettel to pull away from Rosberg at just over two seconds a lap is nothing exceptional in the circumstances, especially given that the Red Bull has proved to be, in terms of consistency from race to race, the fastest car this season.

Everything was in place for him to exploit his best characteristic - speed early in a race. So anyone who says that's to do with traction control is talking out of the top of their head.

It's not possible to have traction control in F1 at the moment. There is a standard electronic control unit provided to all the teams.

There are lots of things teams can do to manage the engine performance, and the driver still has to drive the car and get the best out of it. It's up to the other teams to do this as effectively as Red Bull.

What gives Red Bull their edge?

Now we're straying into another area where Vettel is exceptional.

All the teams are trying to exploit the exhaust gases to improve rear downforce, by directing them in places that are most aerodynamically advantageous.

But the exhaust only gives downforce when the driver is on the throttle. And Vettel commits to the throttle earlier than anyone else.

Of course, he can do that because the Red Bull and its Renault engine characteristics make better use of the exhaust gases than other teams - perhaps by as much as 50%.

But it is Vettel who has given the input to Red Bull's engineers - and especially their chief technical officer Adrian Newey - to enable them to create the car in the way he uses it.

So, if he says he loses the rear if he goes on the throttle earlier, Newey will go away and try to find a solution.

Vettel is contributing to the design of the car going in a certain direction and when he is given extra performance, he uses it.

Look at the history of the last three seasons.

In 2011, when exhaust-blowing was at its peak, Vettel dominated his team-mate Mark Webber.

In early 2012, when restrictions were brought in and Red Bull had not got a lot of blowing effect, Webber was beating Vettel.

Then, when they found a way to make exhaust-blowing effective again, Vettel got on a roll and went on to win the world championship.

This year, exhaust-blowing is more effective than it was last year. Red Bull manage it better than anyone else, and Vettel is beating Webber again.

So he uses the car with the exhaust-blown diffuser well. And Webber doesn't use it as well, because he drives in a more conventional way.

How does exhaust blowing work?

The exhaust-blown diffuser works because of something called the "Coanda effect", which dictates that gases will stay attached to a surface they are directed along.

Red Bull, Lotus and Sauber are the only teams who have their rear bodywork designed in such a way as to guide the exhaust gases all the way down to the area they want them - and Sauber have only done it in the last couple of races.

All the other teams have them shooting across a gap, which is always going to be less precise.

The exhaust-blown diffuser is most effective on the exit of 80-100km/h corners where, if he stands on the throttle, the driver gets lots of extra downforce relative to the level of downforce the car already has. It becomes increasingly less effective the faster the car goes.

So a track like Singapore, where most of the corners are in that speed range, would be where it is most effective.

As far as I can see, Vettel is the only person who drives in a fashion aimed at using this to best effect. The rest have it on their cars but have not adapted their driving style to use it as well as possible.

Vettel buys into the fact that it will give him more rear grip if he nails the throttle, so he does that, and off he goes.

Of course, the only driver with whom there is a direct comparison with Vettel is Webber. It's almost certainly the case that other drivers - such as Lewis Hamilton and Fernando Alonso - could not drive in that way because the exhaust effect on their cars is not as great. They may well be able to drive the Red Bull in the way Vettel does if they were in it.

However, you have to ask why Red Bull's exhaust effect is so much better than on the Mercedes and Ferrari.

I'm not sure Hamilton has it in him to understand the concept of the car, how it works and then go out there and exploit it to the maximum.

You see Alonso trying to lead the team. Is that because the team needs to be lead, or because that is the way he is?

Vettel, by contrast, is a young guy with a huge amount of faith in Newey, quite rightly. If he's told: "This is the way the car works, you need to find a way of using it", I think he would go out and dig deep to try to do so.

The drivers all have very similar levels of talent, but certain things make some stand out from others.

You can make a list of negatives for all the drivers, but Vettel arguably has fewer than anybody.

It seems to me that Vettel comes back every year and adapts himself to whatever is needed, and he does whatever work he has to do with the team to get the best out of his situation.

He and Red Bull are in the position they are because that's where they deserve to be.