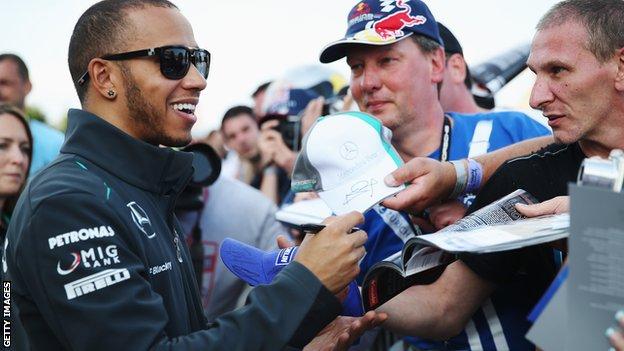 I wanted to talk to you in this column about my relationship with my fans, and why it is so important to me.

For me, it all started when I went to the Belgian Grand Prix in 1996. I was 11. I went up to one of the drivers for an autograph and he just ignored me.

I remember thinking that I never wanted to make a kid feel the way I did then.

Later, I started getting people noticing me a little bit in my year in GP2 in 2006, and then in 2007 when I started in Formula 1 it obviously became more common.

I remember coming home to my parents' house one time that year. I went to the petrol station and someone noticed me, and it kind of took off from there.

Pretty soon, I started to see people arriving at tracks with banners and being real supporters of mine. That was when it hit home how much it meant to me to see that.

Sometimes people want to give me a gift. If I'm on the driver parade on race morning and I see a flag, I'll point people out.

I come from Stevenage, a little town in Hertfordshire. I never in a million years thought that would happen to me.

When you're trying to make it to F1, or be a racing driver, you don't think that one day people are going to be looking up to you, or following you, buying your caps, or whatever. It's not on your mind.

But now I'm here I feel like some of these fans give me so much energy. People come up with banners with things I've said on them. Some of them are 20 metres long.

I honestly feel like it's more than just me. It's my team, my family, the people who make the effort to support me. I really appreciate that, because they could support anyone else.

Whenever I meet them, I always try to give them as much time as I can and really try to show my appreciation for the love and support they give me.

I know I'm really fortunate to be in the position I'm in - I'm living my dream, and I never forget that - and I think I have a good connection with the fans when I see them.

It's not always easy, because over a race weekend we are very busy, so we don't have a lot of time to give. And you have to be very careful with the energy you send and pay attention to the situation you're in.

For example, if there are 10 people waiting and there are three Hamilton fans and the rest are wearing Red Bull T-shirts, I will spend less time with them than with the people who are devoted to me, and have made their own tops or whatever.

Eventually, of course, you do have to walk away. I always stay for a period of time and then say: "Guys, I've got to get going - I'll see you tomorrow," and they're generally really understanding of that.

Away from a race, it can be even more difficult.

There are different scenarios. Some people are really nice and respectful and polite, and that's great. Other people can be really rude.

The other day, I was having breakfast and a woman came over and said: "Are you a musician?" I said I wasn't. She said: "I know you're not a musician. Me personally, I like Jenson Button - can I have a picture of you?"

It's funny in one way, but obviously at the same time it's kind of awkward and you do find yourself thinking: "Why is she coming to see me?"

On another occasion recently, a guy noticed me, nudged me and stopped me, and was really loud and in my face. If something like that happens, I just continue walking.

When I got to F1, I was thinking I never wanted to let anyone down. I wanted everyone who walked away from meeting me to be happy.

But the fact is, no matter how much you do, you can sign 1,000 autographs and it's still not enough. And while some people are genuine fans, others are not.

Sometimes, there'll be a queue of people, you'll sign for the first guy, then you'll work your way down the line, get to the 10th guy and the first guy will be there again, trying to get something else signed.

I have my own Twitter and Facebook pages, and that's great because you get to interact directly with the fans, but obviously you're open to people who are less supportive as well.

I've had my problems with Twitter in the past, as everyone knows, and it can easily be a trap if you're not careful. But I've learned from all the mistakes I've made.

There are nasty comments from people sometimes, but I still want to share pictures and stuff with the fans - the supporters and the kids. That's what it's all about.

It's for them that I have decided to re-launch my website.

I built a website in 2006, but when I first got to F1 McLaren took it over and basically made it theirs with my name on it. It was really just a way of them selling merchandise.

After I left, I got my team together and said I really want a proper website. One where people can get a sense of who I am and not be one of those boring websites.

I wanted nice colours, great pictures, good interaction. It will have lifestyle stuff, the charity things I'm doing, racing and music. Maybe one day I'll put my music on it, who knows?

There'll be live feeds, my comments on what a track is like, trying to make it as engaging as possible.

I have included all my social media profiles so my fans all around the world can get involved.

It's really neat. It will be going live next week, I hope you'll go and have a look and find it interesting.