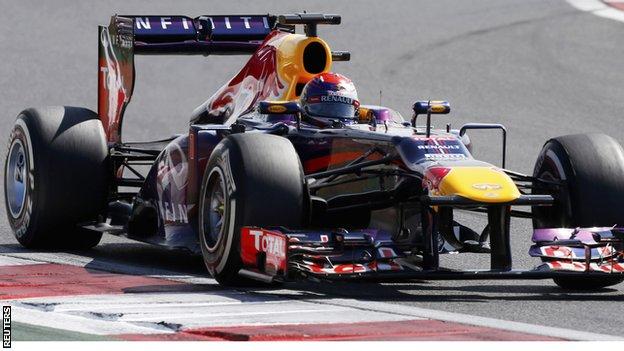 Alonso, Vettel's closest championship rival, is 60 points behind the German with 150 still available in the remaining six races.

Ferrari's Felipe Massa was seventh, ahead of Lotus's Kimi Raikkonen.

Sauber's Nico Hulkenberg and the McLaren of Jenson Button rounded out the top 10.

Hamilton was fastest in both sessions on Friday, but Mercedes slipped back on Saturday. Hamilton was 0.451secs slower than Vettel, and 0.014secs behind his team-mate.

"But don't discount them. They have a couple of knobs and switches they'll be using to improve the car before qualifying. The battle for pole is not done yet."

Hamilton had a troubled session. On his installation lap he complained of a brake vibration, which required a change of brake discs.

In the middle, he inadvertently held up Rosberg when his team-mate was on a flying lap and Hamilton was building up to one, and at the end a radio transmission was broadcast of Hamilton castigating his team for not keeping him abreast of the traffic around him.

Alonso ended the session in fifth place, his Ferrari still no match for the Mercedes or Red Bulls on one-lap pace, but he was only 0.154secs adrift of Hamilton - and 0.215secs clear of Grosjean.

There was an encouraging performance from struggling Williams. Pastor Maldonado, using a new front wing that was not available to team-mate Valtteri Bottas, was 12th fastest.

Scot Paul Di Resta was only 16th in the Force India, three places and 0.167secs behind team-mate Adrian Sutil.