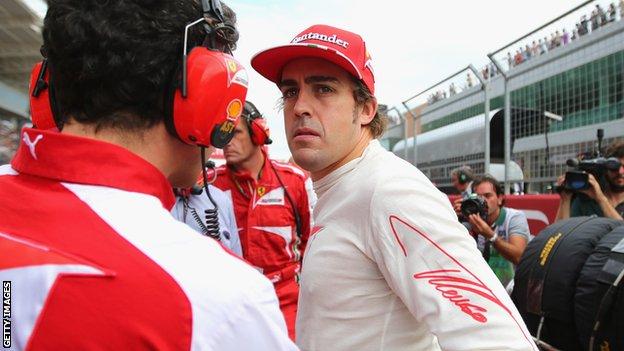 Fernando Alonso's hopes of winning the world title effectively ended with his sixth-place finish in Korea.

The Ferrari driver still has a mathematical chance, but realistically it is all over and Red Bull's Sebastian Vettel, victorious at Yeongam, will probably win it.

He'll do so in either India or Abu Dhabi, or perhaps even Japan next weekend.

Korea was a poor race from Ferrari and to have any chance of the championship, Alonso needed to win it, or at least be ahead of Vettel.

The car was not quick enough and Alonso never looked comfortable with the situation.

He was off the road far more than is usual for him, and it looked a little like he was rattled.

Ferrari have lost quite a lot of performance in recent months but even with that they have tended to go forward in the races compared to qualifying.

In Korea, they even lost that.

Ferrari needed to show after the summer break they knew how to make progress with the car - and they still do.

For three years now, since the start of 2011, they really haven't proved capable of effectively developing their car to a level that will allow them to fight for world championships.

They progressed a little early in 2012, but that season started so badly there was a lot of room to go forward.

Over that three-year period, you would have to say Ferrari have been pretty average, and that's not a good place to be when there is a new car for next year that has to be designed under a new set of regulations.

I'd be telling myself I needed to find a solution on this car first.

There is a reasonable difference between the chassis regulations this year and next but if you don't know what's going on with what you have after five years under one set of rules, there is no obvious reason you'll know under the next.

Ferrari have made it clear they feel they are behind on the technology through which teams use exhaust gases for aerodynamic effect, which Red Bull do better than anyone.

Red Bull use their rear bodywork to keep the exhaust gases attached all the way to the area they want them.

Lots of other teams - including Ferrari - have it blowing across a hole and when you do that, the gases just get swept away by the mass airflow.

It's much harder to get them going in the right place.

The result from Korea is not a coincidence; Red Bull, Lotus and Sauber finished ahead of everyone else and they are the only teams who use that bodywork philosophy.

Exhaust blowing will not be a feature in the same way next year because the exhaust pipe has to exit high up in the centre of the car.

But the fact teams such as Ferrari - and McLaren and Mercedes - have not adopted Red Bull's solution suggests there is something awry in their modelling of how the car will work.

Teams base their design decisions on data - so the data those teams are getting on that must be wrong and they need to look at that.

The benefits of the right design

Korea was a perfect demonstration of how that exhaust design works.

There was a bit of a kerfuffle before the race about Red Bull allegedly having traction control because their traction was so good in Singapore.

But good traction is exactly what allowed Sauber's Nico Hulkenberg to stay ahead of Alonso and Lewis Hamilton in Korea, and it comes down to the exhausts giving better rear downforce coming off the corners - and therefore more grip.

Sauber have a Ferrari engine - while Red Bull and Lotus use Renault - so there is no magic Renault engine mapping.

Sauber struggled earlier this year with the rear of the car giving up in corners. But since they switched to their new rear bodywork configuration around the Belgian Grand Prix, that problem has gone away and their performances have improved enormously.

That has to be down to the exhaust system.

It allowed Hulkenberg to get on the throttle early and get good traction out of Turn One so, even with the help of the DRS overtaking aid, Alonso and Hamilton could not get close enough to pass him into Turn Three.

Sauber were decent in qualifying, Hulkenberg and team-mate Esteban Gutierrez were eighth and ninth respectively on the grid, the German made a great start to get into fifth place on the first lap and kept it together after that.

This is what's so good about Hulkenberg - put him in a position where he is racing for big points and he can drive with the best of them.

And yet some teams - McLaren being one - have rejected the idea of him driving for them next year because he is too heavy.

This is down to the increased weight of the new turbo power units next season, which means teams are going to struggle to get their cars down to the minimum weight limit.

So a heavier driver means they may be racing heavy, which means a lap-time deficit.

On one level the situation may be good for Hulkenberg, because probably the last place he wants to end up is McLaren, given the state they're in at the moment.

But on another level, it's ridiculous.

Yes, extra weight is a small penalty, but to get to F1, a taller driver like that has had to come through a lot of categories where it's a much bigger one - such as karting and Formula Three.

So to make it suggests his talent is of a higher level than a smaller bloke.

The word is Hulkenberg will end up at Lotus next year - and I really hope he does.

But if, for some reason, he ends up being dumped now he's got to the top formula and proved how good he is, that would be a bit stupid.

And if the regulations are making that happen, they need to be changed immediately.

Regardless, if I was in a team faced with a choice between a slower smaller guy and a quicker bigger guy, I would take the bigger guy without a nanosecond's thought.

You can overcome that technically one way or another, even if it involves a compromise somewhere, but you can't make a slow driver quick.

Mercedes in a spin?

Korea wasn't the greatest of races for Mercedes and I'm a bit confused by that.

Ross Brawn leads that team and he has been around a few pit walls in his time and made some pretty good decisions.

But there was not much evidence of that in Korea.

They left Hamilton out far too long when his tyres had lost grip.

The reason they gave for that was bringing him in earlier would have meant converting to a three-stop strategy, which would have lost more time, and they could not have known the safety car was about to come out and save them from doing that.

But by then most of the teams had accepted the tyres were not lasting as well as they expected and were making that call anyway. Sauber were an example - they brought Hulkenberg in on lap 26, three laps before Hamilton.

So Hamilton would only have been in the same boat as him - and the Mercedes was comfortably ahead of the Sauber at the time.

The decision almost certainly cost Hamilton third place - because he had more than enough time in hand at that point to pit and still come out ahead of Kimi Raikkonen's Lotus, too.

If they had brought Hamilton in when they intended to, on lap 28, leaving him out would have cost them 12 seconds of race time.

As it turned out, he had to do another lap because team-mate Nico Rosberg's front wing broke as he passed Hamilton.

At that point, panic took over.

They should have let Hamilton through but Rosberg was brought in for a front-wing change instead, so Hamilton lost another two seconds there.

They could have got Hamilton ahead, brought him in first, and he would have been gone by the time Rosberg got there.

So lots of things went wrong, starting with not reacting to the driver's feedback on the tyres.

A lot of people are messing up at the moment and it is making it look like Red Bull are running away with it.

If the other teams operated as efficiently as Red Bull do, it wouldn't look as easy for Vettel as it does.