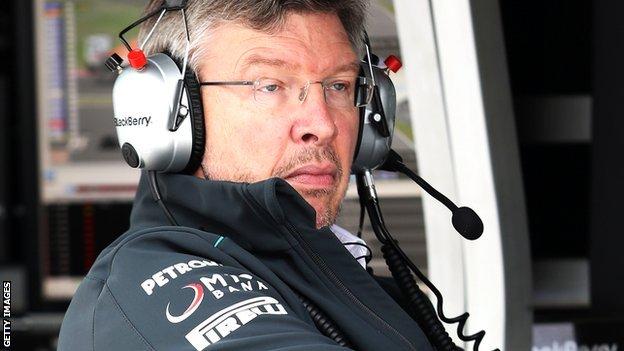 The team have been discussing the 58-year-old's future for several months.

"I am in negotiations with Ross Brawn," said Lauda, the team's non-executive chairman. "There's no decision on how things will be in the long term.

"That's been the situation for a long time. My goal is clearly to retain him but he will only make the decision at the end of the year."

Lowe started work in his new role as executive director (technical) in June.

When Mercedes signed him, their initial intention was to remove Brawn, but plans shifted and they have since said they plan a gradual handover.

Lowe will eventually run the sporting and technical sides of the team. Executive director (business) Toto Wolff, who is the Mercedes motorsport director, will take charge of the business and political aspects.

Brawn, who masterminded Michael Schumacher's seven world titles as well as Jenson Button's in 2009, has again this week been linked with a role heading up Honda's F1 operation.

When BBC Sport approached him about this at the British Grand Prix at the end of June, he said he "knew nothing about it" and wanted to stay on at Mercedes.

A report in Germany has raised the possibility of Brawn moving to McLaren, but BBC Sport has been assured this is not the case.

Lauda did not specify that he wished Brawn to remain in his current role, and in fact Mercedes regard the idea of one single team principal in F1 as an outdated notion.

That begs the question of what role Brawn will fulfil if does stay with the team.