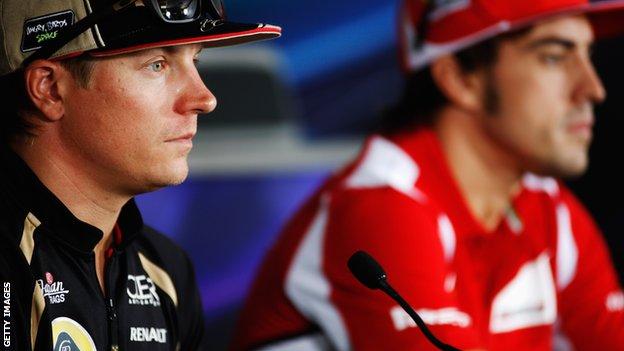 Fernando Alonso believes his new team-mate at Ferrari next season, Kimi Raikkonen, is no faster than his current partner Felipe Massa.

The Spaniard used the pair's record at Ferrari from 2007-09 as evidence.

"In terms of speed, Felipe is not any slower. When they were together, Felipe was as quick as him in a way," he said.

"So if we have a competitive car we will enjoy the season and do very good things. If not, it will be very similar to this year."

Raikkonen won the 2007 world championship with Massa in fourth place.

The following year, the Brazilian finished second - one place above the Finn - before Raikkonen finished sixth - five positions ahead of his team-mate - in their final year together.

Ferrari have signed Raikkonen because they feel he will be more consistent than Massa.

While sometimes qualifying close to Alonso, and occasionally ahead of him, Massa has had an up-and-down time in races during the last four years.

This weekend, meanwhile, Alonso can break the Formula 1 record for most career points.

With at least a sixth-place finish, Alonso - who currently has 1,559 points - will overtake Michael Schumacher's 1,566.

The 32-year-old Spaniard admitted the change in the points system in 2010 - to more than double the number of points awarded for top-six finishes, and to extend points down to 10th place - had somewhat skewed the equation.

"But getting the most points in history will be very nice to have.

"It would be very nice to achieve that record here in Japan, to have something to celebrate, but first let's get those points before we talk too much about this record.

Alonso admitted it was "almost impossible" for him to win the drivers' title this year - he is 77 points behind Red Bull's Sebastian Vettel with only 125 still available in the remaining five races.

He said his target for the rest of the year was to secure second-place overall and try to ensure Ferrari finished in the runners-up spot in the constructors' championship.

Alonso also wants his friend Mark Webber, Vettel's team-mate, to win a race before he leaves F1 at the end of the season to join Porsche in endurance racing.

"He decided to retire and then comes also some bad luck," Alonso said. "It's a shame for him. I wish him luck for the five remaining races.

"It will be great if he can say 'bye-bye' to F1 with a win at least and celebrate that weekend."