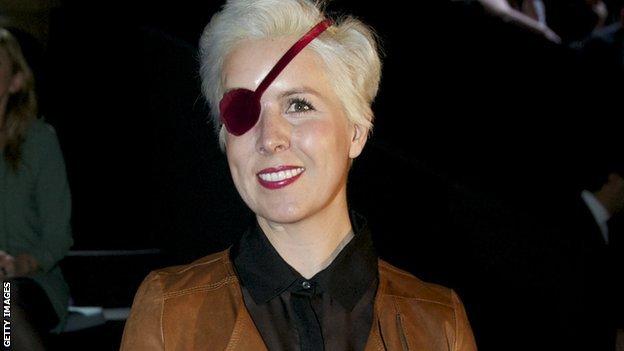 De Villota, 33, was found dead in a hotel room in Seville, Spain on Friday.

"I can confirm that her death was due to natural causes. The family has been informed," Dr Joaquin Lucena Romero, head of forensic services at the Institute for Legal Medicine, said.

Spaniard De Villota lost her right eye in a crash in July 2012 while testing for the Marussia team.

She suffered severe head and facial injuries after colliding with a lorry at Duxford Aerodrome, Cambridgeshire, but had been cleared to resume driving.

De Villota, who had been in motor-racing for 12 years, had previously competed in Spanish Formula 3 and the Daytona 24 Hours race in the United States.

Her dream of driving a Formula 1 car came two years ago when she tested a Renault.

A family statement read: "Dear friends: Maria is gone. She had to go to heaven with all of the angels."

De Villota, daughter of ex-Formula 1 driver Emilio, was reported to have been in Seville to launch her autobiography.

The police spokeswoman said De Villota's body was found at around 07:00 (06:00 BST) at the Hotel Sevilla Congresos in the southern Spanish city.

"She was a wonderful figurehead. She showed the world how she was going to beat [the setback of her horrific crash], find a new life and come back to motor-racing and she's written this great book.

"It is a very sombre place here, it's a very close community and everyone is thinking about the great sense of loss."

Forensic scientists and officers from the homicide unit were due to examine the scene.

F1 teams and drivers have expressed their shock at the news of her death.

Spaniard Fernando Alonso, the Ferrari driver, said: "Today is a very sad day for Spanish sport. We have lost a fighter with a huge smile."

Britain's Jenson Button added: "It's horrendous news. Very tragic, the girl has been through so much, more than most people go through in their lives. It has been tough for her but this is horrific news and a real shock to the whole paddock and the world of motorsport.

"We saw her this year in Barcelona. We were doing some work for a children's charity and she was the first one to put her hand up to do it, and got a lot of other drivers involved - she was doing a lot for the community."

Sauber team principal Monisha Kaltenborn, who worked alongside De Villota as an ambassador for the Women in Motorsport commission, told BBC Radio 5 live: "I had so much respect for the courage she had and how she fought against all the odds and I'll always remember her having a smile, no matter what happened.

"After the accident everybody else would have thought she doesn't really want to have anything to do with motorsport.

"But no - there she was, texting away and saying she wants to be back as soon as possible.

"It didn't take her any time at all until she was back; she was planning maybe even to drive but more important to her was to give other people the courage that you can still do so much even if you've had such a major setback."

"Maria De Villota was not only admired for competing near the very top of a male-dominated sport, but also for the way she had recovered from her terrible accident in the summer of 2012.

"Here in Spain she was known for her strength of character and positive spirit, and the charity work she did away from the track, promoting road safety and campaigning against domestic abuse.

"Next week her autobiography, entitled 'Life is a Gift' was due to be published, and only a few weeks ago she was interviewed on Spanish TV. She talked enthusiastically about her life, and the challenges that lay ahead."

Last year, De Villota spoke movingly about the initial recovery stages following her accident and recalled: "The surgeon came up to me with my family around him and said: 'Maria, we have saved your life, I don't know if you remember you had a serious accident but we have to tell you that you have lost your eye'.

"I asked him: 'Are you a surgeon? Do you need both hands to operate? I am a Formula 1 driver and I need both eyes to drive.

"Before, I only saw F1, I saw myself in a car competing. I did not see what was important in life, the clarity to say: 'I am alive'.

"It has given me my bearings, given me back what's important. I accept it with the energy to say I am going to live out this chance 100%."

Martin Whitmarsh, the McLaren team boss and president of the Formula 1 Teams' Association (Fota), said F1 would discuss what would be the appropriate way to mark De Villota's death over the Japanese Grand Prix weekend but that it was not a simple decision.

"We will be talking amongst ourselves," he said told BBC Sport. "You have to be careful; a lot of racers don't want these issues to detract from a race weekend.

"Everyone wants to demonstrate the right level of sympathy but the real racers would want the show to go on and wouldn't want a fuss to be made. It's not something we need to amplify, it's something we've got to be sensitive about."