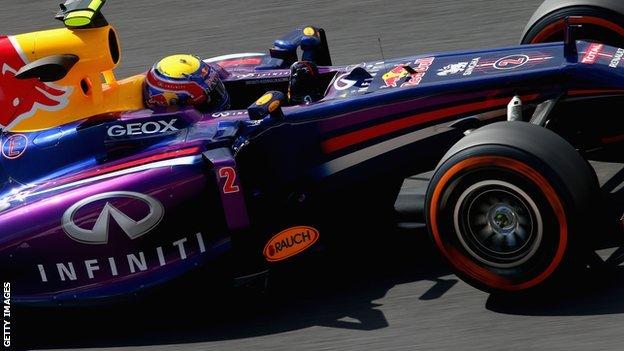 The Australian was 0.134 seconds quicker than Hamilton, whose team-mate Nico Rosberg was third ahead of Lotus's Romain Grosjean and Ferrari's Fernando Alonso.

Red Bull's Sebastian Vettel, who can clinch the title this weekend, was ninth after reliability problems.

Pole position looks set to be a fight between the Red Bull and Mercedes drivers, and few would bet against Vettel sealing his fourth in a row despite his difficulties.

The German was able to do only eight laps in the session as a result of a problem with the battery for his Kers power-boost system, which needed to be changed.

That meant he did not get a run on the softer 'medium' tyres, which will be the favoured tyres in qualifying.

The 26-year-old was 0.314secs behind Webber after their first runs on the 'hard' tyre, about the lap-time loss for a failed Kers.

Lotus may also be contenders for the second row of the grid - Grosjean was 0.654secs off the pace but he and Raikkonen did their 'medium' tyre runs on low fuel earlier in the session than most to enable them to do further race preparation so did not get the benefit of the track when it was in its best condition.

Raikkonen, who missed a sizeable chunk of Friday's second practice session after a spin into the gravel, was 0.239secs off his team-mate's pace.

"There may be a bit more to come from Lotus," said BBC F1 technical analyst Gary Anderson. "They may be a little bit disappointed with Raikkonen's time; they may think he could have got a bit more out of it."

Alonso, who needs to finish eighth or better on Sunday to take the championship to the next race in India if Vettel wins, had admitted to struggling on Friday.

Despite that, Ferrari did less laps than any leading rival in the session and the Spaniard was 0.787secs off the pace - about normal for Ferrari in recent races.

Alonso and team-mate Felipe Massa have been closely matched all weekend and the Brazilian ended the session right behind his team-mate in sixth place, only 0.015secs slower.

Sauber's Nico Hulkenberg, who starred on his way to fourth place in Korea last weekend, was 10th fastest, ahead of the McLaren of Sergio Perez and the Toro Rosso drivers Jean-Eric Vergne and Daniel Ricciardo.

Incidents continued to come thick and fast after a series of crashes and near-misses on Friday at the technical and challenging Suzuka track.

A number of drivers ran wide, including both Lotus drivers and Hamilton, before Adrian Sutil became the latest driver to crash, losing control as he put the power down on the exit of Spoon and spinning into the inside barrier.