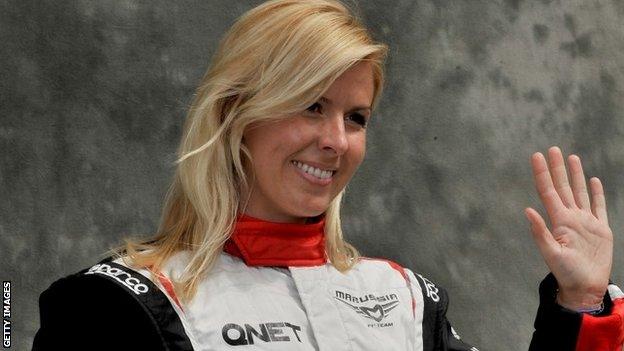 Spanish racing driver Maria De Villota died as a consequence of the injuries she suffered during a crash last year, her family have been told.

De Villota, 33, was found dead in a hotel room in Seville, Spain on Friday.

The Formula 1 reserve driver lost her right eye in a crash in July 2012, while testing for the Marussia team.

In a statement, the family said a forensic doctor told them she had died "as a consequence of the neurological injuries she suffered" in the incident.

De Villota needed lengthy surgery on serious head and facial injuries after colliding with a lorry at Duxford Aerodrome, Cambridgeshire, but had been cleared to resume driving.

The family statement added: "Maria is gone, but she has left us a very clear message of joy and hope, which is helping the family move on in these moments."

The potential link between De Villota's crash in 2012 and her death is being investigated by Britain's Health and Safety Executive.

An HSE spokeswoman said the organisation "would expect to be kept informed of any new evidence". The Banbury-based Marussia team said last year the car was not a factor in the accident.

The De Villota family, who confirmed Maria will be buried in Madrid "in the most strict intimacy", have made no mention of whether there is a legal case to answer on safety grounds at the aerodrome.

Formula 1 drivers will hold a minute's silence at the Japanese Grand Prix on Sunday, and dedicate the winner's podium to De Villota.

A statement from the Grand Prix Drivers' Association (GPDA), which represents most competitors, said the silence would be held before the drivers' parade at Suzuka.

"She has been an active member and contributed to driver safety in a very enthusiastic and most professional manner," the GPDA said.

"Her positive attitude, maturity and extreme commitment will never be forgotten and are something we have learned from. Maria will be missed and always remembered by all of us."

De Villota, daughter of former Formula 1 driver Emilio, was reported to have been in Seville to launch her autobiography.

A police spokeswoman said her body was found at around 07:00 (06:00 BST) at the Hotel Sevilla Congresos in the southern Spanish city.

She previously competed in her country's Formula 3 competition and the Daytona 24 Hours race in the United States.

De Villota, who had been in motor racing for 12 years, first drove a Formula 1 car when testing for Lotus Renault two years ago.