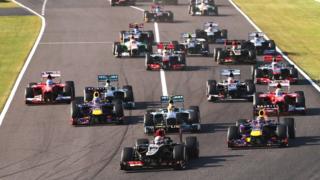 Sebastian Vettel takes another step closer to a fourth consecutive world championship with victory in the Japanese Grand Prix at Suzuka.

Ferrari's Fernando Alonso finished fourth to continue the contest for the world championship until the next race in India where Vettel only needs to finish in the top five to claim the title.