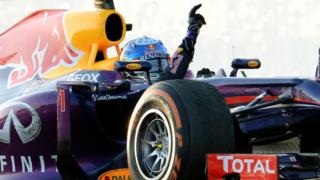 Vettel's win at the Indian Grand Prix secured his place among the legends of the sport, joining compatriot Michael Schumacher (2000-04) and Argentine Juan Manuel Fangio (1954-57) as the only drivers to have won four consecutive world championships.