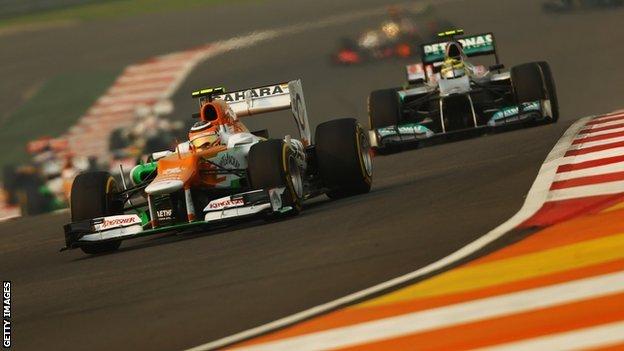 The Indian Grand Prix will go ahead as scheduled this weekend after a hearing into alleged tax irregularities was delayed until next week.

Campaigner Amit Kumar had accused race promoters of not paying entertainment taxes for the 2012 event and demanded the cancellation of Sunday's race.

But a court official said: "The case will now be heard next week."

The Indian Grand Prix has been dropped from next year's calendar but promoters are optimistic of a return in 2015.

The German, who has led every racing lap at the Indian Grand Prix since its debut in 2011, will claim the title if he ends up fifth or higher, regardless of where Alonso finishes.

The long-term future of the Indian Grand Prix is uncertain after F1 boss Bernie Ecclestone removed the race from the 2014 calendar.

Organisers are trying to find a new date for its return in 2015, with Ecclestone keen for the race to take place in the early part of the season, rather than its current October date.