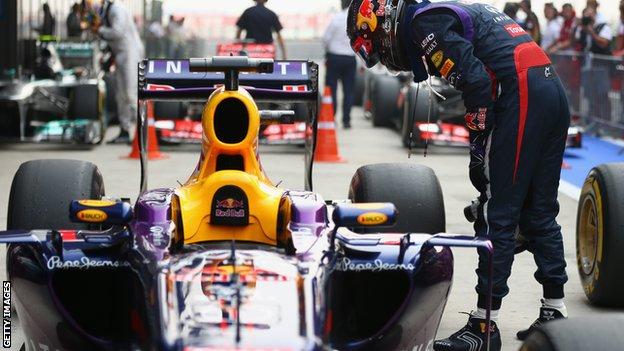 Pirelli has asked Formula 1 teams to limit running on the tyres in Sunday's Indian Grand Prix on safety grounds.

Teams have been asked not to use the 'soft' tyre for more than 15 laps and the 'medium' for no more than 35 laps.

Governing body the FIA is refusing to order the teams to follow the advice.

But if any teams goes beyond the limit and hit problems they could be brought before the stewards and asked why they ran their cars in a dangerous configuration.

A Pirelli spokeswoman said: "It's not as dramatic as is being made out. We send something like this to the teams after every day at a grand prix with tyre-related information and recommendations.

"It's highly unlikely any of the teams would try to run the tyres beyond these limits anyway - particularly the soft tyre.

"Had we brought the hard and medium tyre here, we would have had a boring one-stop race. We have been asked to produce tyres that give multiple pit stops. The sport has to make up its mind what it wants."

It is the latest in a series of controversies to hit Pirelli this season that have tested the patience of teams and senior F1 figures.

The company was forced to change the design of its tyres after a series of dramatic failures during the British Grand Prix.

At this weekend's Indian Grand Prix, the 'soft' tyre has been suffering severe degradation after just handful of laps.

The tyres are suffering blistering - when the surface overheats and bubbles - after just three or four laps, leading to a loss of pace of as much as three or four seconds a lap.

One senior engineer at a top team said this was the worst blistering ever experienced with the Pirelli tyres since the company entered F1.

The FIA does not want to force the teams to comply with Pirelli's limits because race director Charlie Whiting feels it is unfair to force teams whose cars have better tyre life to be reduced to the lowest common denominator.

The teams all have means of measuring tyre life live during the race and feels they should be trusted to do so.

Pirelli is also disagreeing with the teams over its desire to do more testing to prepare tyres for next season, when the cars and engines will be different following a major regulation change.

Pirelli motorsport director Paul Hembery said in India this weekend: "We have to do some testing. If we cannot, then we will not be able to provide the tyres for next year."

But the teams are frustrated with Pirelli because it is refusing to pay the costs for the tests it wants to do. So far, Pirelli has only offered to pay for circuit hire.

Teams point out that F1 cars cost hundreds of pounds a lap to run, so a three-day test in which teams cover hundreds of laps would cost them tens of thousands of pounds or more at a time when costs in F1 are a major concern.

Pirelli has been told if it wants to do extra testing they must pay the entire costs of the teams involved.