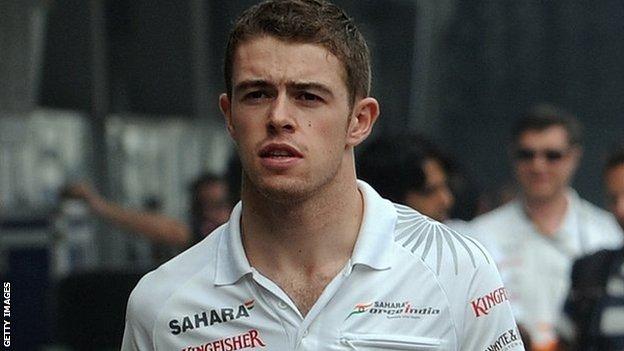 Paul Di Resta believes that ending his points drought will not prove to be a one-off inspired by his Force India team performing on their home patch.

The Scot ended a sequence of seven races without a point, stretching back to the British Grand Prix, by finishing eighth in Sunday's Indian Grand Prix.

"I'm feeling more comfortable and think we can be optimistic of performing at a similar level in Abu Dhabi next week."

With Di Resta's future with the team still in the balance, the result could ultimately prove crucial.

After lining up 12th on the grid, Di Resta kept out of trouble through the 60-lap race to come home one place ahead of team-mate Adrian Sutil to earn four championship points.

Team principal Vijay Mallya also welcomed the result at his home race, with the points helping Force India edge a little further clear of Sauber in the race for sixth place in the constructors' championship.

"Like everybody in the team, I am delighted to see both Force Indias score points in our home race," said Mallya.

"That's the goal we set ourselves ahead of the weekend and the six points scored are very important for strengthening our position in the constructors' championship."

Force India have suffered more than most from the changes made to Pirelli's tyres following the failures that struck at the British Grand Prix.

"The second half of the season has been challenging for us, but we showed that we never give up and that all the recent hard work has paid off," added Mallya.