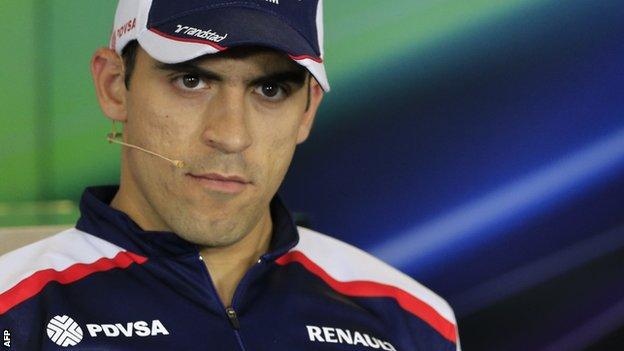 The Lotus seat being vacated by Kimi Raikkonen's move to Ferrari in 2014 will be filled by Nico Hulkenberg or Pastor Maldonado.

Both drivers have finalised deals with Lotus, who must choose between them.

The team would prefer Sauber driver Hulkenberg, but it could depend on concluding an investment deal that has been dragging for months.

Maldonado's hopes depend on him being able to take backing from a company contracted to current team Williams.

The Venezuelan, 28, will definitely leave Williams at the end of the season and also has chances at Sauber and Force India.

Ferrari's Felipe Massa is a leading contender to replace Maldonado at Williams - but contrary to some reports, no deal has yet been done and the Brazilian's chances of the seat are "50-50", according to a source close to the team.

Finnish driver Valtteri Bottas is expected to stay at Williams for a second season.

Lotus have been trying to seal an investment deal with Quantum Motorsports, a consortium featuring backers from the US, Abu Dhabi and Brunei, for some months but it has still not been finalised.

The protracted nature of the deal has led to doubts that it will ever happen - but if it does, Lotus will definitely sign Hulkenberg.

They see the highly-rated German, 26, as a like-for-like replacement for Raikkonen, with the appeal that he would maximise their position in the constructors' championship.

The higher a team finishes in the constructors' table, the more income they receive, with tens of millions of pounds between each position.

Raikkonen's team-mate Romain Grosjean is expected to stay at Lotus for a third season after a series of strong performances this year.

If the Quantum deal does not come off, Lotus will be left with a significant gap between their costs and their income running into tens of millions of pounds.

Owners Genii Capital, a Luxembourg-based private equity group, would have to plug this themselves if Lotus signed Hulkenberg, who does not have significant financial backing.

Genii's alternative is to sign Maldonado, who potentially comes with an annual £30m of sponsorship from the Venezuelan state oil company PDVSA.

However, PDVSA's contract is with Williams and still has two years to run. PDVSA want to get out of it but Williams are determined to hold on to the income.

One possibility would be for PDVSA to sponsor both Williams and Lotus - and Massa, as a South American, would be an acceptable face for their marketing campaign on the continent.

But it is not known whether PDVSA could justify backing two F1 drivers at a time when Venezuela is in a state of political and social upheaval following the death earlier this year of president Hugo Chavez.

Alternatively, PDVSA could pay compensation to Williams for breaking the deal, which allied to backing Massa can source from Brazil - which is said to be worth a little over £10m - would ensure the team had sufficient income for 2014.

Lotus accept that taking Maldonado would almost inevitably leave them worse off in terms of performance as he is less consistent than Hulkenberg, but Genii may consider the extra income to be worth the loss.

If Maldonado lands the Lotus seat, Hulkenberg would either stay at Sauber or move to Force India.

Should he return to Force India, where he drove in 2012, that would put Scot Paul Di Resta's seat in doubt.

Sauber had been expected to run the Russian teenager Sergey Sirotkin as their driver following an investment deal with a group of companies from that country.

However, some sources say they now recognise that Sirotkin may not be ready for F1 and may instead run former Renault and Caterham driver Vitaly Petrov, who failed to find an F1 seat this year, with Sirotkin as reserve driver gaining experience by running in selected Friday practice sessions.

If Hulkenberg leaves, Sauber may well retain Mexican Esteban Gutierrez, who has been erratic but shown promising form on occasion in his debut season this year.