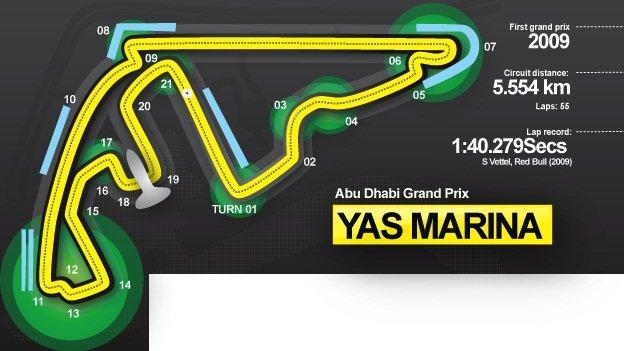 It is fair to say that Abu Dhabi is not exactly everyone's favourite grand prix venue - at least in terms of the track itself.

In marked contrast to India - where we have just come from - it is a bit of a 'nothing' circuit,

People love the Indian Grand Prix because it is so demanding, with difficult fast corners.

Abu Dhabi, on the other hand, is much more stop-go, while the fast corners - Turns Two, Three and Four and 15 and 16 are easily flat-out kinks.

They're not demanding corners - they don't require the skill levels demanded by Turns 10 and 11 in India.

Interestingly, though, some drivers do tend to stand out in Abu Dhabi, particularly Lewis Hamilton and Sebastian Vettel.

Throughout his years with McLaren, Hamilton was always very good on the brakes and therefore excelled in Abu Dhabi, especially in the last 'marina' sector.

Hamilton's style is to be the last of the late brakers, turn the car, and nail the throttle.

While the corners in the third sector in Abu Dhabi are ideal for that, he is still struggling for braking feel in the Mercedes. He hasn't got the confidence that he had in the McLaren to really nail it into the corner.

A driver has to be within half a metre of the perfect braking point, and if you have to back out of it by a metre or two, you lose a lot of time. So it's taking away one of his major assets.

As far as Vettel is concerned, he has always been very good at being precise in slow corners. And his delicate feel for using the exhaust gases for aerodynamic effect amplifies that.

Those type of corners work well with the exhaust effect.

If a driver can get the car into the corner when it is just on the point of going into oversteer and then nail the throttle - exactly the opposite of what your mind will tell you to do, because the natural reaction would be to lift to stop the slide - then the exhaust gases create the downforce that gives the car the grip not to slide, and then come off the corner faster.

To be quick in Abu Dhabi, a car needs a good front end, to enable the driver to turn sharply on the brakes, and good traction.

Those two things don't normally go hand in hand, but Red Bull, particularly, are able to get the front-end grip they need and then use exhaust gases for grip at the rear and good traction.

It's difficult to understand how Abu Dhabi ended up with such an uninspiring track.

There is all the space and money in the world in Abu Dhabi so you can only assume that somebody must have come up with the wrong brief in what they wanted from the track.

They could have made a sensational track, with nice big flowing corners. It could have been the Suzuka or Spa of the Middle East. Or taken all the best features from all the tracks in the world and put them all together in a pile, like they did in Austin, Texas.

To create a good overtaking opportunity, the corner on to the straight needs to open up more, to get more speed coming off it.

The way it is in Abu Dhabi, the car in front just disappears coming off the corner. The guy behind can't get a run because if he puts the throttle on too early he loses out with wheelspin.

The structure of the weekend is also slightly odd. The race is at twilight, so you need all your data from that time of day, when the track temperature is falling throughout.

That means that practice one - which is 1pm - is effectively useless, as it's at the hottest time of the day. So it is very difficult for teams to keep up to date with what they need from the car.

The Yas Marina track cost an estimated $1.5bn to build and was Formula 1's first ever day-night race

Pirelli has chosen the soft and medium tyres for Abu Dhabi, the same as in India. I don't expect there to be as many problems with degradation of the soft tyre as there were last weekend because the track is not as demanding.

Having said that, their fundamental characteristics remain - the medium is a decent, durable tyre; the soft is effectively a qualifying tyre, good for one fast lap and not much else.

There will still be a big difference between the medium and soft in lap time, but the difference in degradation will not be as big as it was in India.

But the gap between the tyres will push most towards a two-stop strategy, with the possibility that some teams might be able to make a one-stop work, as Lotus did in India.